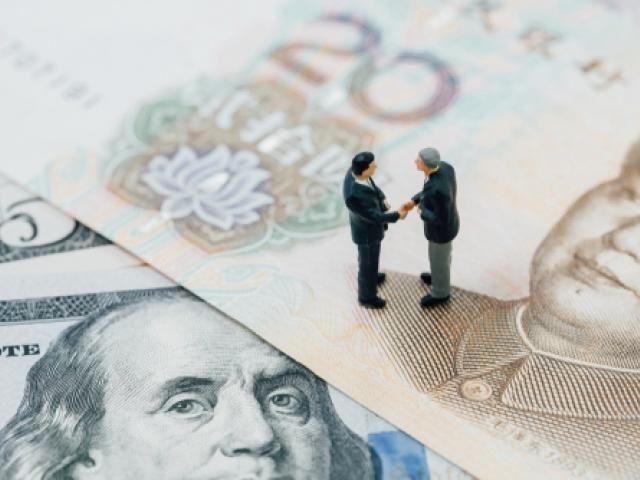 Stocks across Asia were mostly higher this morning after strong US earnings and cautious optimism over US - China trade negotiations influenced risk sentiment.

US President Donald Trump’s latest comment on how trade talks with China are “going very well” has clearly boosted confidence over negotiations between the two sides concluding on a positive note. However, with Trump also stating that the talks are “very complex” and the current March deadline is not a “magical date”, a breakthrough deal is still some distance away. A market-friendly outcome this week will be for both sides to agree on extending the 1 March deadline, which should provide more time for finding a middle ground on trade policy.

Global equity markets are likely to be mostly dictated by US - China trade developments for the rest of the trading week.

Is the Dollar about to lose its crown?

The broad economic and monetary policy divergence between the United States and other major economies has certainly supported the Dollar in recent months.

However, the Greenback’s outlook is slowly pointing in favour of bears, after a ‘patient’ Fed and a string of disappointing economic data from the United States reduced buying sentiment towards the currency. With the key fundamental drivers behind the Greenback’s appreciation slowing diminishing, is King Dollar losing its grip on the throne?

Investors will direct their attention toward the FOMC Minutes this evening which should offer some clarity into how ‘patient’ and ‘flexible’ the Fed wants to be when it comes to raising US rates. Markets will also be looking for reasons why the phrase “some further gradual increases in the target range” was removed from the statement. The Dollar is likely to depreciate against a basket of major currencies if the minutes reinforce speculation over the Fed taking a pause on rate hikes this year. With the combination of political uncertainty in Washington, soft domestic data, concerns over slowing US economic growth and expectations over a pause in US monetary tightening threatening the Dollar’s competitive advantage, further downside is on the cards.

It has been an incredibly bullish trading week for Gold thus far with the precious metal hitting a fresh 10-month high this morning, thanks to Dollar weakness and fears over slowing global growth.

Gold bulls remain in the driver’s seat, with further upside expected as geopolitical risk factors and speculation over the Fed taking a pause on monetary tightening boosting attraction for the precious metal. The yellow metal has the potential to extend gains this evening if the FOMC minutes are presented with a dovish touch – ultimately weakening the Dollar even further. In regards to the technical picture, Gold is heavily bullish on the daily charts as there have been consistently higher highs and higher lows. The breakout and daily close above $1340 is seen opening a path towards $1353.60 and $1360 in the medium term.