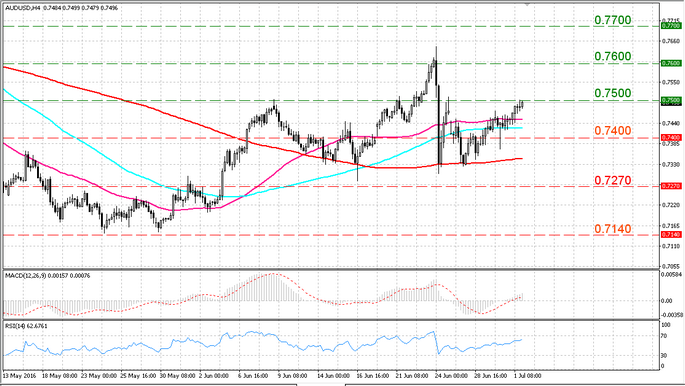 The Australian dollar rose by 0,63% during the Friday trades. The US dollar was stable against major currencies, while the uncertainty after a referendum in the United Kingdom persisted.

The aussie was actively growing and was able to reach the mark of 0.7500. The price just tested the resistance and was not able to break it through. The resistance is at 0.7500, the support comes in at 0.7400.

MACD moved into the positive area. The indicator shows a divergence. RSI approached the overbought area. If the signal line moves higher that will be a buy signal, if it decreases that will be a sell signal for us. The instrument is above the Moving Averages (50, 100 and 200) on the 4 hour chart. The Moving Averages are moving upwards, that is a buy signal. The price moved away from the averages and may return to them soon.