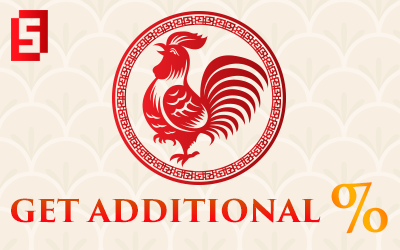 Fort FS would like to announce the launch of “Chinese New Year” promotion which is assigned to increase your profits from trading in global financial markets. Starting from 1 February 2017 until 3 March 2017 for every 10th closed lot your account will be credited with a bonus that will be available for withdrawal or further trading.

All standard and cents accounts with the balance more than 100 USD (or the equivalent) are participating in the promotion. It doesn't matter when the last deposit was made, whereas, the higher the balance after the order is closed - the higher the bonus amount is.

The bonus is calculated as following:

In order to refuse to participate in the promo-action please send a request letter to support@fortfs.com or use the request system in your Trader’s Cabinet.

Do not lose the chance, just keep on trading and get your bonuses!