During the week we should open Sell position for two reasons. Firstly, low inflation expectations in the G-7 countries is a negative factor for "yellow metals".On Thursday, the Bank of England signaled to market participants about drop of consumer activity in England. In Germany inflation turned into a negative figure per annum again, in Japan we also no see inflationary pressure. In this context, investors have no need to buy gold to hedge inflation risks, which may arise in the global economy. Second, strengthening of the US currency brings gold additional risks, which has a close inverse correlation with the US dollar. XAU/USD is called by investors "anti-dollar". Therefore, growth of USD quotations has a negative impact on value of the precious metal. However, in the first half of the week gold can strengthen slight against the background of reduced "appetite for risk". Usually that has a positive effect for so called "safe" assets. So, this week we should open Sell positions on growth of quotations to 1282/1297 and take profit at 1260. 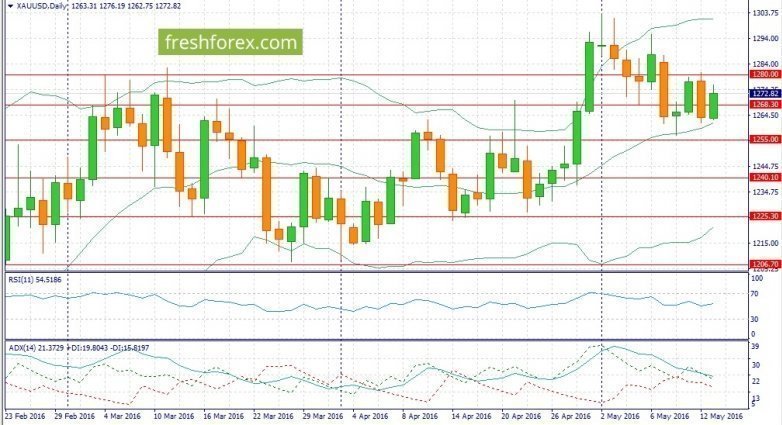 During the week we should open short positions and that is despite a portion of positive statistics from the US Department of Energy and OPEC received the last week. Let me remind you that the US energy department had reported about drop of the crude oil reserves for the first time for the past four weeks. On 13 of May OPEC expressed its expectations on reduction of the non-OPEC production volume, particularly in the United States, which is against the background of bankruptcy of shale companies. Against this positive background, "black gold" set a new six-month High and, in my view, such high levels should be used to open Sell positions. Reduced prices of oil can be related to strengthening of the US dollar in the currency market. Since the beginning of the month, US dollar index USDX basket had rosen by 1.66%, while Brent oil had added 0.97% during this period. Such disposition usually means end of drop of oil prices, because the price of oil is denominated in US currency. However, Friday's release of Baker Hughes pointed reduction of number of drilling rigs in the United States by 10 units, which may encourage bulls to test High of the last week. In my opinion, it would be a trap for traders and then we will see drop of quotations. So, this week we should open Sell positions on growth of quotations to 48.35/49.90 and take profit at 45.70. 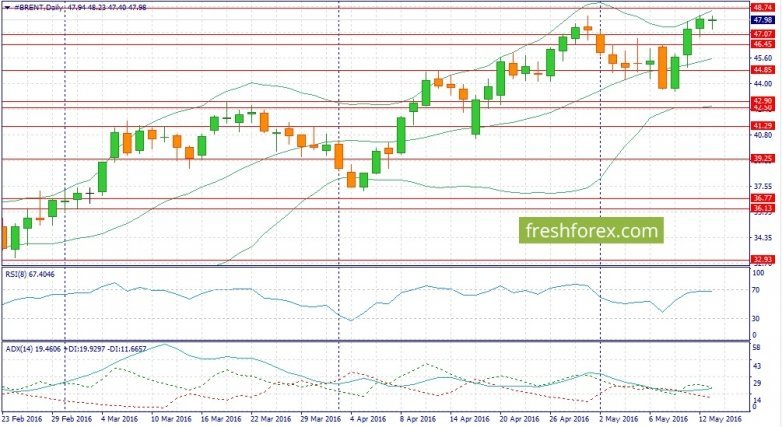 In my opinion, there are two reasons to look closer to sales in the US stock market. Firstly, the main event of the week will be the report of inflation data for April on Tuesday, May 17th. In the first month of the second quarter, yield of the 10-years' bonds added 5 points, which, along with growth of income of population and boost of retail sales allows us to count on release of a moderately positive data. Gasoline rose by 3.63% in April, which is also a positive factor for inflation. Good data on inflation is a negative factor for the stock market, because the monetary authorities will have to think about tightening monetary policy. Secondly, the last trading week only two "protective" sectors finished in the "green zone"(utilities and non-cyclic products), which usually is a sign of correction. When investors are worried, they turnt to these sectors. Against this background, this week should open Sell position on growth of quotations to 2057/2077 and take profit at 2021. 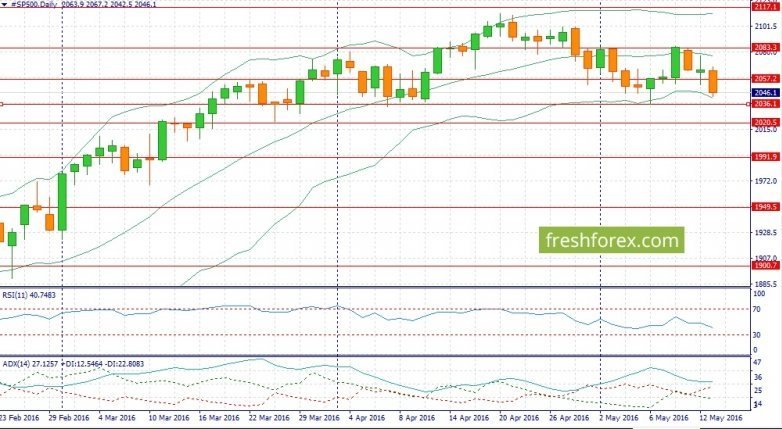