The US Building Permits and Housing Starts data released yesterday afternoon outperformed expectations. The former rose to 1.5% and the latter to 4.8% respectively, compared to the expectation of 0.6% and 0.5%, showing an increased demand in the US housing market.

The dollar index future surged from 96.750 to an intra-day high of 97.180 on Tuesday 19th July, breaking out the significant range bound upside resistance at 96.80 post UK referendum. The price section has been moving alongside the upper band of Bollinger band indicator, indicating a bullish trend. This morning the bullish trend continued, the dollar strengthened across the board. The dollar index future broke out the next psychological level at 97.00, reaching an intra-day high of 97.36, further testing the upside uptrend line resistance at 97.25, which is the same level of the significant downtrend line since last December at 97.20.

The bullish trend is currently unchanged, yet the price section is around the significant resistance of 97.20. On the 4 hourly chart, the KD indicator shows a divergence from the bullish trend by creating a lower low. Besides, on the daily chart, KD indicator is at a high level around 85, suggesting a retracement before further rally. The price section pulled back to the uptrend line at 97.15 and held. If confirmed breaking through the downside uptrend line support, further testing the newly formed support level at 97.00 followed by 96.80. Keeping an eye on the Initial Jobless Claims and Existing Home Sales figure released tomorrow. A series of positive economic figures would pave the way for future rate hike. 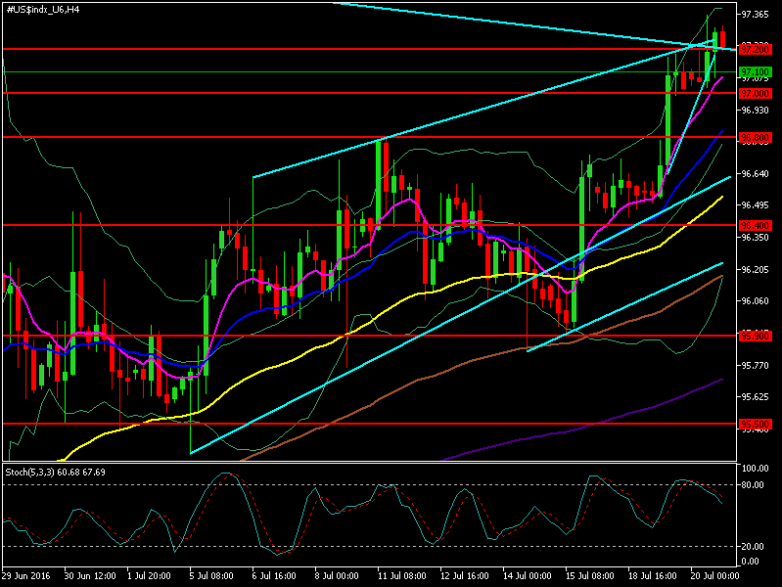