The UK Claimant Count Change data released this morning was better than expected, and the GBP strengthened across the board. The number of people claiming for unemployment benefits slightly increased by 0.4K in June in the UK, comparing to the expectation of 3.5K and the previous figure of 12.2K. The unemployment rate also dropped to 4.9% compared to the previous figure of 5.0% in June, the lowest since 2005.

Before the data was released, the GBPUSD was in a bearish trend, the price section dropping and testing the previous low at 1.31 yesterday. On the 4 hourly chart, a head and shoulders pattern has formed since 12th July.

This morning the GBPUSD was helped by the outperformance of economic data. On the 4 hourly chart, a long bullish candlestick broke out the downtrend line, the left shoulder, and held above the support level at 1.31. Yet the current price section is just below two resistance levels, 20 and 50 EMAs at 1.318 and 1.32 respectively. If confirmed breaking out, further testing the next resistance level at 1.327. Downside support 8 EMA at 1.315 followed by 1.31 and 1.30.

On the 1 hourly chart, KD is above 80, K line and D line are going to crossover from above, being aware of a pullback.

The breakout might be a short term rebound resulting from the positive economic data. In term of a larger scope, a note of caution is suggested on the post referendum uncertainty and the potential rate cut in August. The IMF cuts its UK growth forecast for 2016 by 0.2% to 1.7% due to the aftermath of Brexit, pointing out the decision of leaving the EU has damaged the short term economic prospects of the UK. 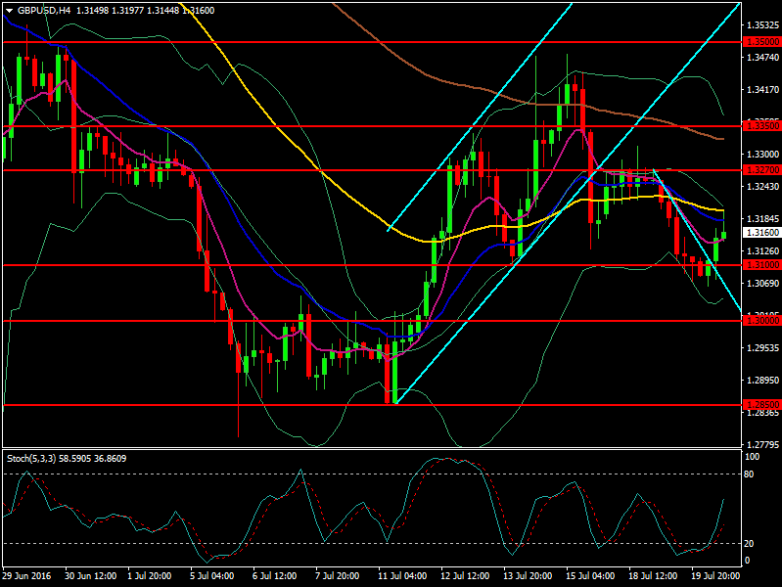