Oil prices rebound as the US commercial crude oil inventory figure was released yesterday. With a reduction of 2.3 million barrels compared to the expectation of 2.1 million. It is the ninth consecutive drop in the US crude stockpile.

West Texas Intermediate, WTI Spot crude, has being oscillating in a downtrend channel since 9th June, forming the right shoulder of the head and shoulder pattern since 26th April. The pattern indicates that the upside selling pressure has increased over the period.

Yet the drawdown of crude inventory provides the support for oil prices. The downside trend line support at 44.33 held followed by a rebound. On the 4 hourly chart, a long bullish candlestick surging from the two-month low of 44.63 to an intra-day high of 46.16 after the figure was released, a 3.43% rise. The 8 EMA is going to crossover 20 EMA from below, and the current section is above both EMAs, indicating a bullish attempt. Yet KD and CCI (Commodity Channel Index) indicators are both at a high level around 90 and 130 respectively, suggesting a pull back.

Keeping an eye on the oil prices drivers, including the trend of USD, a strong dollar results in the drop of oil prices, and the upcoming crude oil inventory figures. 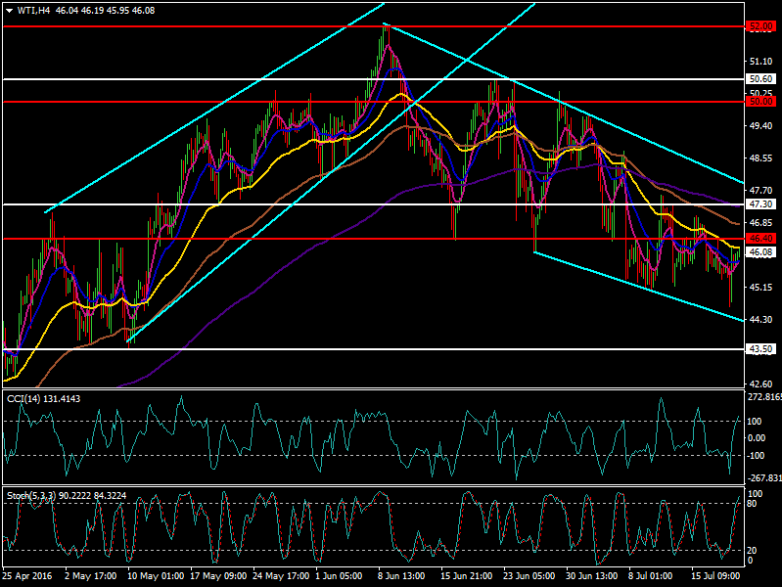