Gold strengthened as USD weakened yesterday, the dollar index fell from 97.225 to 96.760 because of two reasons. Firstly, although the Unemployment Claims and Existing Home Sales both beat expectations, the Philadelphia Federal Reserve Manufacturing Index underperformed falling to -2.9 compared to the expectation of 5.0 and the previous figure of 4.7, which is the worse figure since this February. Secondly, the dollar index slid as a corrective pullback because the KD indicator was high.

The safe-haven gold surged post referendum reaching to a peak of 1375.06 on 6th July followed by a retracement as the dollar strengthened resulting from positive economic data and market speculation on Fed’s future interest rate hike. A double top pattern has formed for gold prices between 06th to 11th July, indicating increased selling pressure. Gold spot price has been oscillating in a downtrend channel since 11th July. Yesterday there was a bullish attempt to breakout the upside downtrend line while the dollar weakened, yet pulled back into the channel as the dollar rebounded later on. The current price section is moving alongside the upside downtrend line.

On the 4 hourly chart of the dollar index, KD has been lowered to the level around 30, indicating a rebound. The current price section is still oscillating in the uptrend channel, the bullish trend is unchanged. Keeping an eye on the trend of the dollar, as dollar and gold prices have an inverse relationship. 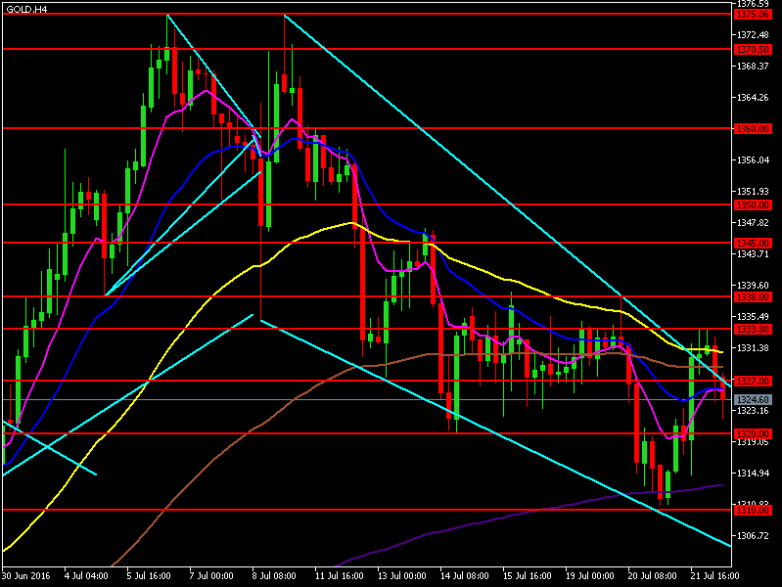