Fed will announce the interest rate decision along with the FOMC statement this evening at 7pm UK time.
Markets expectations are that Fed will likely keep the rates unchanged at 0.5% as the overall economic outlook is not solid enough for a rate hike. The outperformance of the U.S. labour market, retail sales and ISM indices in Q2 brighten the economic outlook. While the aftermath of Brexit and the unreached inflation target of 2% are likely to make the Fed keep interest rates on hold.

The U.S. labour market pointed to a strong resurgence in June. The latest data released on Tuesday 26th July also showing a modest recovery, including services PMI, CB consumer confidence, and new home sales. CB consumer confidence and new home sales figures were better than expected. The former was 97.3 compared to the forecast of 95.9. The latter rose to 592K and 3.5% compared to the previous figure of 572k and -6.0%. Although Services PMI underperformed, falling to 50.9 compared to the previous figure of 51.4, yet still above 50. A reading below 50 indicates contraction. Service sector is at the heart of the economic growth for the U.S. as accounts for almost 80% of GDP.

The FOMC stated that in the last meeting they will wait for additional information in order to assess the impact of Brexit on the U.S. economy. At present, there is only a few post-Brexit data available may not be enough for a thorough assessment.

Another key issue that will influence the rate decision is whether the inflation target of 2% can be reached. Although core PCE (personal consumption expenditure) is still below 2%, core CPI has constantly gained in the past months resulting from the rise of housing and health care prices, indicating steadily increased inflation pressures.

As a whole, there are both pros and cons of an interest hike for the Fed. Keeping an eye on the upcoming inflation, labour market, and industrial data. If it shows a solid and constant economic resurgence post-Brexit, then it will increase the possibility for the Fed to raise the interest rate at some point either in the second half of the year or the first half of 2017. 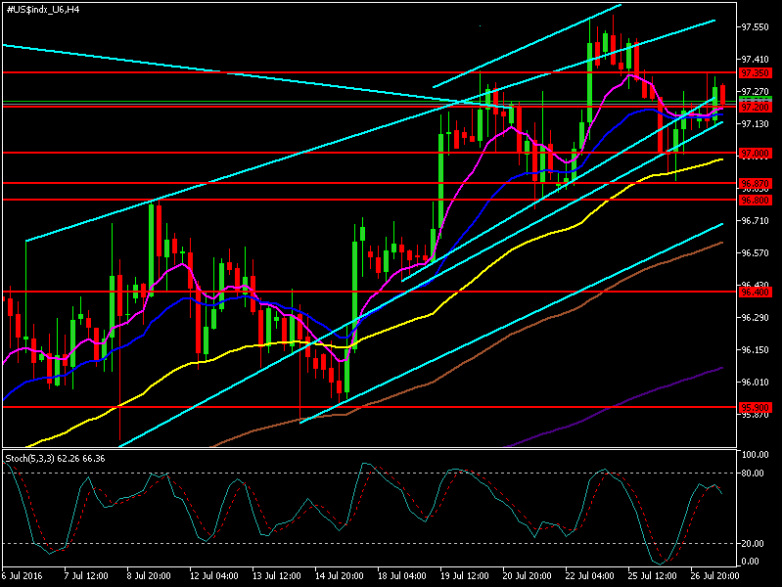 On the 4 hourly chart of the dollar future index, the price has been moving within the uptrend channel since 5th July. On Tuesday 26th July, the price section pulled back testing the downside uptrend line support at 97.0 and held as the KD indicator was high. Since the markets expect that the Fed would keep interest rates unchanged, the price section has been reflecting the consensus, currently oscillating in the uptrend channel along the downside support line.