The Bank of Japan will its announce monetary policy statement along with interest rate decision on Friday 29th July. Market expectations are that BoJ will likely implement stimulus measures, even a rate cut further lower than the current negative rate of 0.1 %.

Ahead of the BoJ’s statement, on Wednesday 27th July Kyodo News reported that Japanese Prime Minister Shinzo Abe announced an economic stimulus package sized over 28 trillion yen ($265 billion). The timing for the statement to be released was sensitive, it seems like Abe is putting pressure on the BoJ. In addition, recently the size of the stimulus package reported varies, Abe’s announcement yesterday has shed light on it.

The Japanese government has submitted the latest fiscal stimulus plan to the Economic and Monetary Affairs Committee, emphasising the importance of co-operation between the government and the central bank, aiming at grappling with deflation and meeting both the 2% inflation and 600 trillion GDP targets. As a result, BoJ is under pressure to meet the goals and will likely implement stimulus measures by all means.

Japanese government had implemented a number of fiscal stimulus packages, structural economic reforms and loosening monetary policies, to deal with deflation since Abeconomics started in the end of 2012. Nevertheless, the outcomes were not in line with the government’s expectations, inflation and consumption has remained static.

In the recent years, overseas demand has slowed down and the yen has strengthened, resulting in the decline of corporate profits leading to the lowering of average wages and household incomes, weighing on the economy. As a result, Shinzo Abe was vigorous announcing monetary easing as soon as the ruling coalition won the election on 10th July. Hence, no action from the BoJ is unlikely at this meeting, with the inflation and GDP targets yet to be reached.

Apart from keeping an eye on the BoJ’s monetary policy meeting. The trend of the dollar also needs to be taken into account.

Yesterday evening the Fed announced that rates remain unchanged, which is in line with market expectations, indicating that the economy recovery is not solid enough for a rate hike.

After the decision was announced, the dollar future index dived, rapidly breaking through the downside uptrend support level at 96.73. In addition, the KD and the ADX indicators of daily time frame both show a bearish reversal. 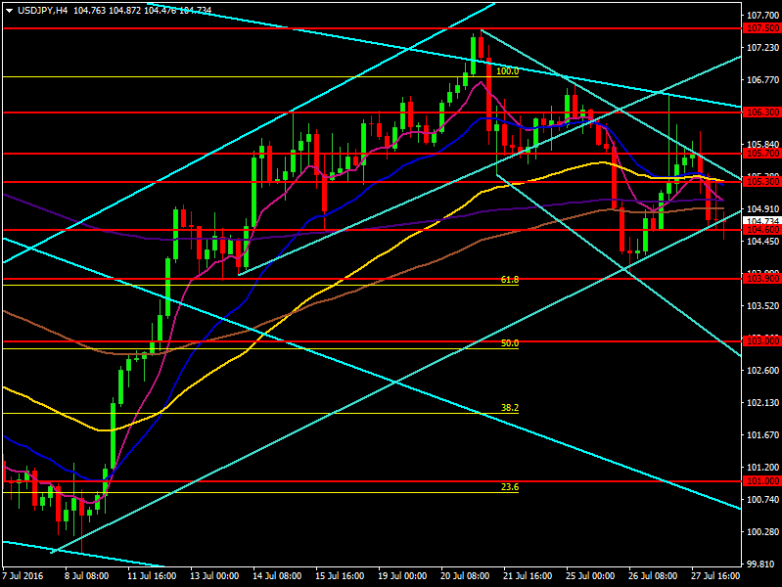 USDJPY also tumbled after the Fed’s announcement. On the 4 hourly chart, while the news was released, the price pulled back after testing the upside downtrend line resistance at 105.70. The price has been oscillating in the downtrend channel and forming a consolidation pattern since 21st July, currently holds above the support level at 104.60. In terms of the Ichimoku indicator, the price section has been moving into the cloud from above on 26th July, indicating a bearish reversal. 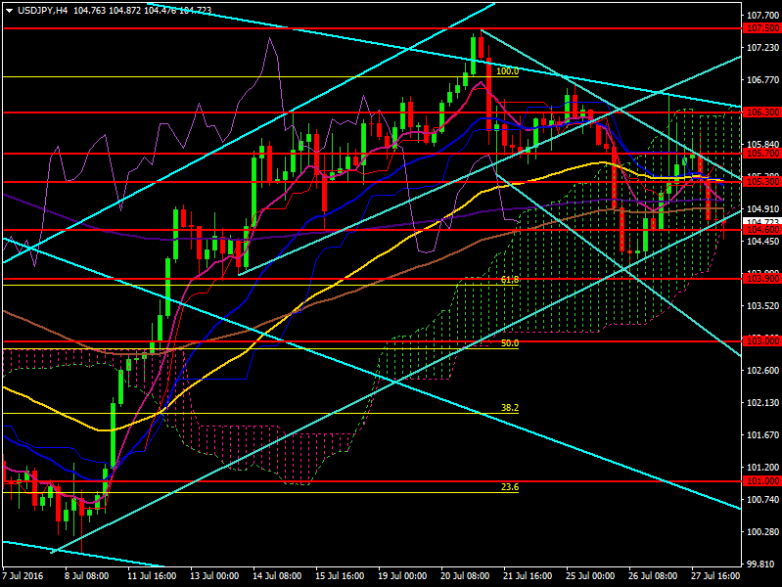