The Fed Chair Yellen made her first day of her testimony before the Congress at 15:00 GMT on Tuesday 14th Feb, which was the first testimony she did after Trump took office.

She adopted a hawkish outlook, which pushed the dollar and the Treasury yields higher.

She stated that waiting too long to remove accommodation would be unwise. She said “If job gains and rising inflation continue as the Fed expects, an increase in the benchmark federal-funds rate likely would be appropriate at our upcoming meetings. Precisely when we take an action — March, May or June — I can’t tell you, I would say every meeting is live.”

The comment implied that the probability of a rate hike at the Fed’s March 14-15 policy meeting has increased. According to CME’s Fed Watch tool, the probability rose to 17.7% from 13.3% after Yellen’s testimony.

However, Yellen warned that the US economy and fiscal policy face an uncertain path under the Trump administration. Furthermore, Trump’s immigration restrictions would slow the economic growth.

The dollar index touched a three-and-a-half week high of 101.48 on Wednesday after Yellen signaled a faster pace of rate hikes, breaking the resistance at 101.00.

EUR/USD has turned bearish since early Feb, trading below the 10 SMA and the 20 SMA, as a result of the strengthening of the dollar and the recent weak Eurozone economic data.

On 14th Feb, the near term major support line at 1.0600 was broken after Yellen’s testimony.

The price is likely to be held temporarily above the support line at 1.0540, as it provides a stronger support.

The 4 hourly and the daily Stochastic oscillators are both below 20, suggesting a rebound prior to the next fall.

However, if the support level at 1.0540 is confirmed broken, the bearish momentum is likely to further test the significant support line at 1.0500.

Keep an eye on the US retail sales, core retail sales, CPI and core CPI for January (YoY and MoM), to be released at 13:30 GMT, and Yellen’s second day of testimony at 15:00 GMT today. They will likely influence the strength of the dollar and the movements of the dollar crosses. 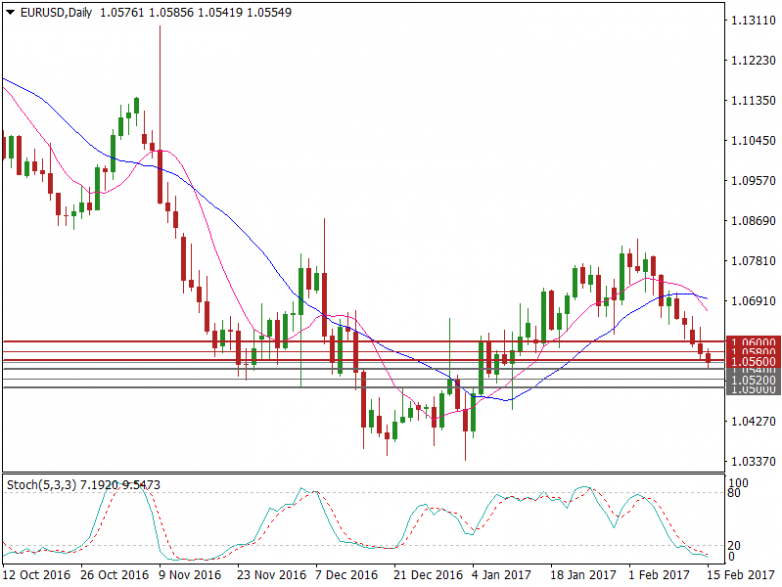 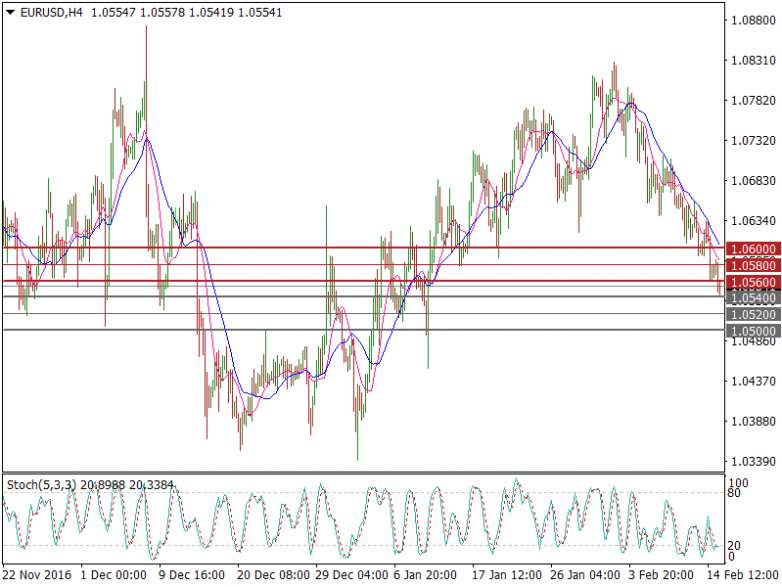