The US EIA Crude Oil inventories (for the week ending March 3), that were released yesterday, jumped to a record high of an 8.209 million rise, surpassing expectations of a 1.66 million increase and the previous reading of a 1.501 increase.

Oil prices plunged on the release of the figure, spot WTI crude oil price broke short-term support levels at 52.00 and 51.00 respectively, hitting a 14-week low of 49.16.

On the daily chart, the 10 SMA crossed over the 20 SMA from above, indicating the trend has now turned bearish.

On the 4-hourly chart, the price has been trading along the lower extent of the Bollinger Band indicator, suggesting the current trend remains bearish.

Although OPEC is making efforts to cut production, the US shale oil industry has been thriving, which offsets the output reduction from OPEC to a certain degree.

US non-farm payroll and unemployment rate for Feb will be released at 13:30 GMT this Friday March 10th.

Keep a very close eye on it, as the data release will likely influence the probability of a rate hike at the upcoming March 14-15 FOMC meeting, USD strength and the volatility in USD crosses and commodities.

Per the CME’s FedWatch tool the current probability of a rate hike in March has jumped to 88.6%. 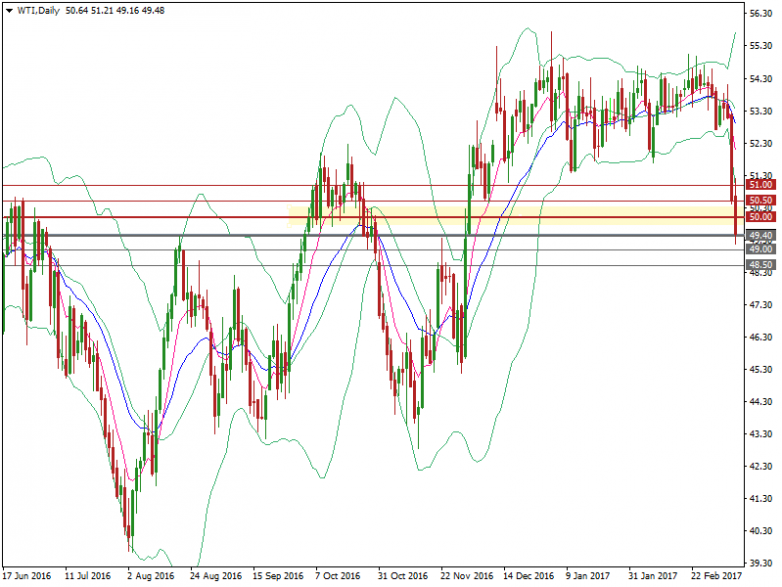