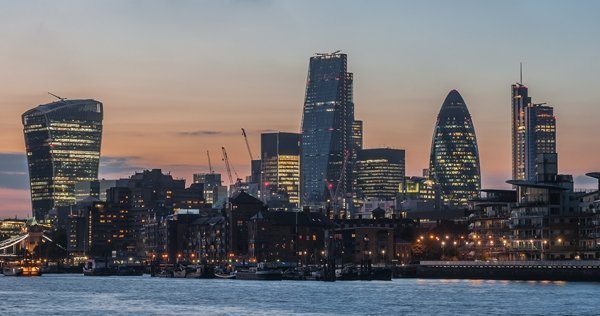 UK Chancellor Phillip Hammond delivered an Autumn Budget that appeared to be somewhat neutral in its content. More sobering was the updated forecast of UK economic growth, which is growing slower than previously thought. Hammond said productivity levels remained “stubbornly flat”, with growth until 2021 expected to be lower than predicted in March. The Office for Budget Responsibility (OBR) is now predicting the UK economy will grow by 1.5% this year – considerably lower than the 2% forecast it made in March. More sobering was the fact that growth will drop to 1.3% by 2020 and rise to 1.5% in 2021 – also lower than its forecast predicted in March. However, the markets recognize that both the OBR and BoE have recently been seen to take a more cautious stance when forecasting growth, so many are looking at these new forecasts as a worst-case scenario that is likely to be bettered. The Budget has done little to appease Prime Minister May’s voters and it appears that her continued leadership will, undoubtedly, come into question in the coming weeks/months.

Data from the US showed new claims for jobless benefits fell for the week ended November 18th, further underlining the robust labour market the US is experiencing. For the week ending November 18th, new claims for unemployment insurance dropped by 13K to 239K, in line with market expectations. Jobless claims have now held below 300K for 142 weeks (nearly 3 years), the longest streak since 1970. 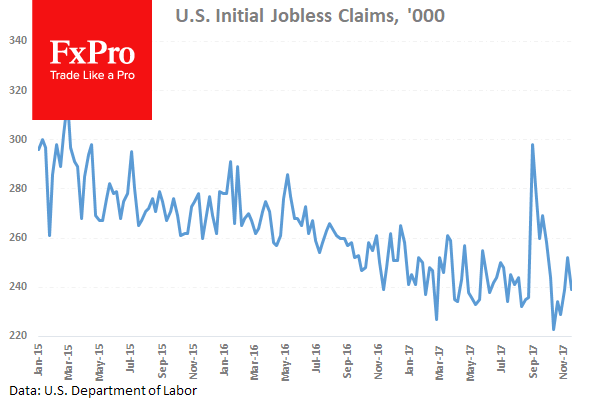 The US Commerce Department released data for US Durable Goods on Wednesday, showing a surprisingly larger-than-expected decrease of 1.2% from October to a seasonally adjusted $236 billion. The fall follows a 2.2% increase in September. The markets had been forecasting a slight increase of 0.2% in October. GDP, excluding transportation, rose 0.4% in October and has increased for 4 consecutive months – albeit below the forecast 0.5% rise. The disappointing data saw USD come under selling pressure in late Wednesday trading. 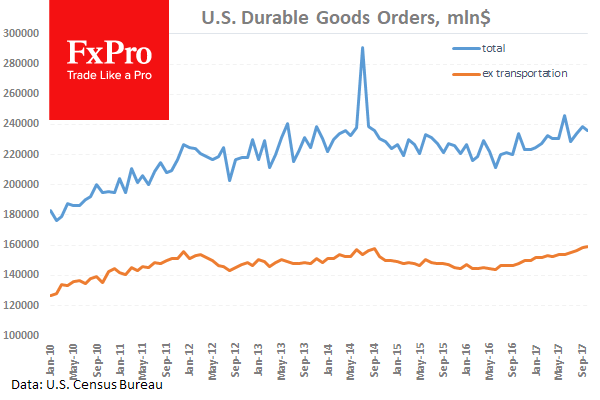 Late on Wednesday saw the release of the minutes of the Fed’s last policy meeting. Many Fed policymakers expect that interest rates will have to be raised in the “near term”, confirming market expectations that the Fed will hike rates in December. The minutes, however, indicated that “Some members expressed concerns about the outlook for inflation expectations and inflation; they emphasized that, in considering the timing of further adjustments in the federal funds rate, they would be evaluating incoming information to assess the likelihood that recent low readings on inflation were transitory and that inflation was on a trajectory consistent with achieving the Committee’s 2% objective over the medium term.” Following release of the minutes USD came under selling pressure that has continued into early Thursday trading.

At 09:00 GMT, Markit Economics will release Eurozone PMI Composite, Services PMI and Manufacturing PMI for November. Composite PMI is expected unchanged at 56, Service PMI is expected slightly higher at 55.1, from the previous release of 55.0, and Manufacturing PMI is forecast to come in at 58.3, lower than the previous release of 58.5. If any data is far from the forecast we can expect to see EUR volatility. 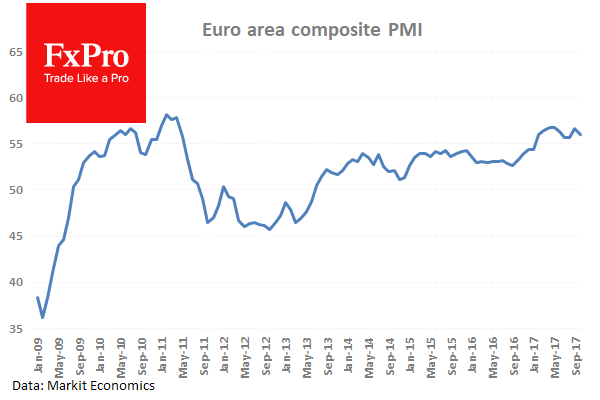 At 09:30, the UK Office for National Statistics (ONS) will release UK Gross Domestic Product (QoQ & YoY) for Q3. Both data sets are expected to be unchanged with the quarter-on-quarter release expected at 0.4% and the year-on-year release expected at 1.5%. If the actual release is significantly different from the forecast we can expect to see GBP volatility. 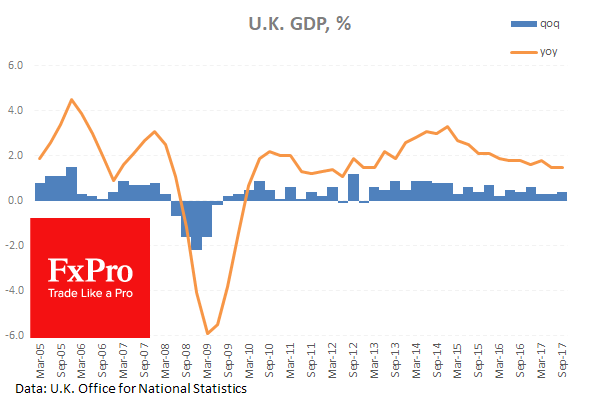 At 16:30, the European Central Bank will release Monetary Policy Meeting Accounts. The markets will be analyzing the tone and the words used to determine future economic policy for the Eurozone. Officials familiar with the thinking of policymakers have suggested that the European Central Bank is likely to make multiple small adjustments to its guidance on monetary policy next year, rather than any major change in language as it ends quantitative easing. Depending on the content of the release the markets may see EUR volatility.