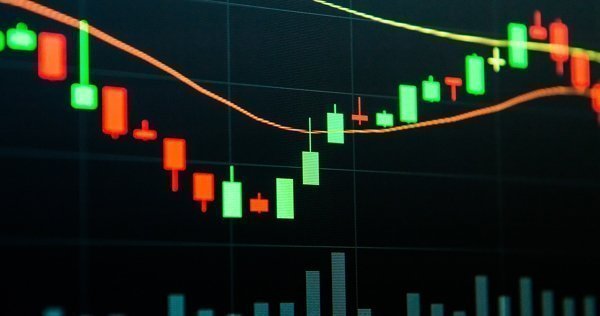 GBPUSD has reached higher in the last few trading sessions. Today’s high was 1.38191 before the price retraced lower. All of this current leg higher resulted from a breakout of the Bull flag pattern starting on the 3rd of January, the high of which forms new support at 1.36127. The breakout occurred on Friday at the 1.35600 level, breaking through 1.36560 and 1.37000 resistances on the way higher. The nearest support for the current price action is located at 1.37500 and a loss of this level may see a probe lower to locate support and test its strength.

Overhead resistance can be found at 1.38354, which is the low from Q1 of 2016 set on the 28th of February and resulted in a rally to 1.47690. This was a major support level as it was not tested again as support until June of that year when the British public decided to vote Leave in the EU referendum. On that occasion, all technical analysis proved useless given the enormity of the event. However, previous support becomes resistance and price has drifted higher back towards the level, now just 60 pips away. 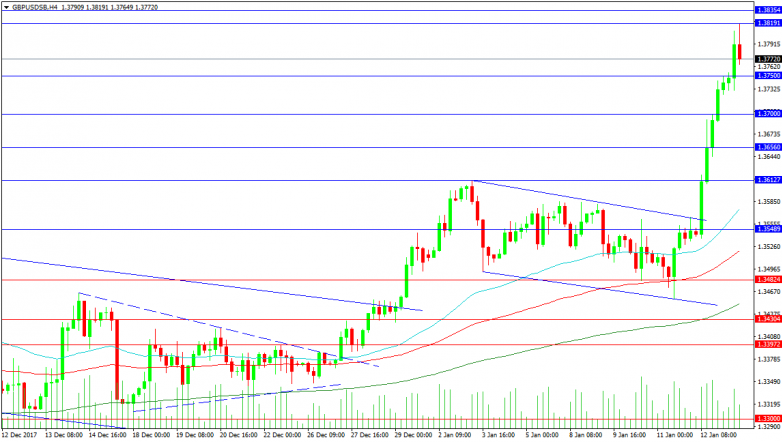 The US30 Index has been rampantly bullish since Wednesday, covering 600 points higher from the close at 25370.00 to today’s high at 25970.00. The resistance level above stands at 26000.00 but it is unknown how many short positions will be brave enough to stand in front of this colossal rally. Taking short positions is risky given the strength of the Bulls and may ultimately provide fuel for further gains when the bear stops are popped. The safest course is for traders to wait for a pullback in price action and then take a position when the turn is confirmed.

Support can be found at last week’s high of 25836.5 and the rising trend line at 25560.00, close to Fridays low. These levels are more important than one would assume at first glance, as a move under these levels would suggest a deeper retracement is taking hold. The next target underneath the trend line is 25240.00, followed by the next rising support trend line at 25000.00. The 24675.00 level also provided support in the not so distant past. 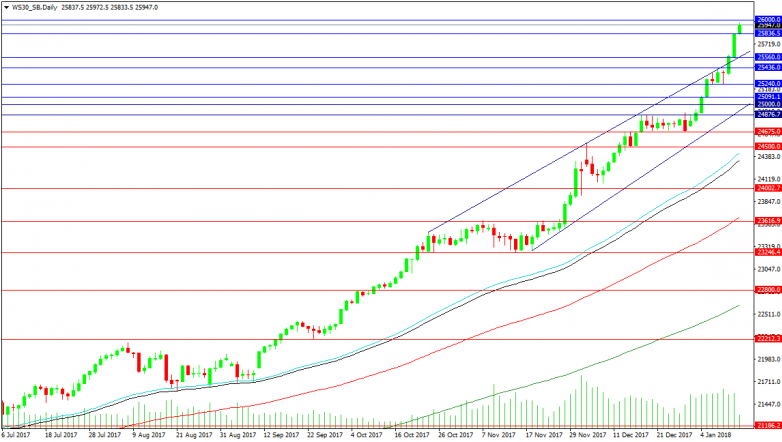