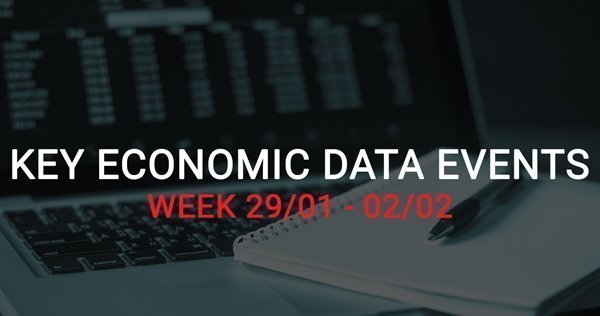 Monday 29th January at 13.30 GMT – US Core PCE, which is the monthly measurement of core spending level. December estimates are for 0.2% MoM and 1.5% YoY. US Personal Spending is also released at the same time. The December figure estimate is 0.5% MoM.

Monday 29th January at 23.30 GMT – Japan Unemployment Rate. Expectations for December rate are to show 2.8% YoY from a previous of 2.7%. Japanese equities and JPY crosses could be impacted by this release.

Tuesday 30th January at 10.00am GMT- EU Gross Domestic Product. GDP is the value of all produced goods and services during the quarter. In this case, it shows the GDP growth compared with the previous quarter. This is the most comprehensive indicator of the state of the economy. Growth or acceleration of growth is positive for the country or region’s economy and currency. Estimates for the Q4 figure are 0.6% QoQ and 2.7% YoY.

Wednesday 31st January at 00.30am GMT – Australian Consumer Price Index is released by the RBA and republished by the Australian Bureau of Statistics. It is a measure of price movements through the comparison between the retail prices of a representative shopping basket of goods and services. The CPI is a key indicator to measure inflation and changes in purchasing trends. Expectations for the Q4 figure are to show 0.7% QoQ from a previous 0.6% and 2.0% YoY from a previous 1.8%. Australian equities and AUD crosses could be impacted by this release.

Wednesday 31st January at 13.15 GMT – US ADP Employment Change. This indicator shows the change in the number of employed individuals in the private sector. It is the main point of reference to official statistics by BLS, and it can cause similar market volatility as the non-farm payrolls. Expectations for the January number is to show 191K from a previous 250K. US Equities and USD crosses could be impacted by this release.

Wednesday 31st January at 15.30 GMT – EIA Crude Oil Inventories. This figure shows the weekly change in the number of barrels in stock of crude oil and its derivatives and is released by the Energy Information Administration. Expectations for the week ending 26th January show a drawdown of -1.071M barrels from a previous -1.998M barrels. This report normally impacts WTI Crude, Brent Crude futures and also some commodity currencies like CAD.

Wednesday 31st January at 19.00 GMT – FOMC Rate Decision and Monetary Policy Statement. Following the Fed’s rate decision, the FOMC releases its statement regarding monetary policy. Expectations for the January rate are to stay unchanged at 1.5%. The changes in the tone and sentiment of the statement may influence the volatility of USD crosses and US equity indices.

Thursday 01st February at 02.45am GMT – China Caixin Manufacturing PMI is a closely watched indicator of production activity. Expectations are for the January figure to remain unchanged at 51.7.

Thursday 01st February at 09.30am GMT- UK Manufacturing PMI. The Manufacturing Purchasing Managers Index (PMI), released by both the Chartered Institute of Purchasing & Supply and the Markit Economics. This index is a closely watched indicator for the conditions in the manufacturing sector and the UK economy. Expectations are for the January PMI figure to remain unchanged at 56.3. Any significant changes in the released data could impact UK equities and GBP crosses.

Thursday 01st February at 15.00 GMT – US ISM Manufacturing Index is released by the Institute for Supply Management (ISM). The Manufacturing Index shows business conditions in the US manufacturing sector. Expectations are for January figure to show 59.7 from a previous 59.00. Markets that could be impacted by this data release include US equities and USD currency crosses.

Friday 02nd February at 9.30am GMT – UK Construction PMI. The PMI Construction is released by the Chartered Institute of Purchasing & Supply and Markit Economics, and it shows business conditions in the UK construction sector. Estimates are for the January figure to show 52.1 from a previous 52.2. Markets that could be impacted by this data release include UK equities and GBP currency crosses.

Friday 02nd February at 13.30 GMT – US Non-Farm Payrolls and US Unemployment. The nonfarm payrolls are released by the US Department of Labor and present the number of new jobs created during the previous month, in all non-agricultural businesses. The monthly changes in payrolls can be extremely volatile, due to its high relation with economic policy decisions made by the Central Bank. Expectations for January Non-Farm payrolls are to show 184K jobs created from a previous 148K in December. US Unemployment rate is expected to remain at 4.1%. Average Hourly Earnings are forecast to rise 0.3% MoM, in line with last month. Markets that could be impacted by this data release include US equities and USD currency crosses.