The USD weakened further overnight after the move began in the US trading session yesterday. USDJPY moved down under the 110.000 level after making a high of 111.389. The Macro background is mixed with tensioning increasing around Iran but positive tones coming from US/China negotiations and US/North Korean talks going ahead as planned. The Italian Election has delivered a Coalition Government that “will put Italian national interests first”. This is creating a tension with the EU as the new government has proposed billions of euro in tax cuts, increased social welfare payments and scrapping pension reform, all of which would break the fiscal discipline rules of the EU. The FTSE MIB is set to open down again today after falling to the April lows yesterday around 23083.00.

Chicago Fed National Activity Index (Apr) was 0.34 against an expected 0.14 from a previous 0.10 which was revised up to 0.32. This data has held above the zero level for 2018 with a spike higher to 0.88 in the February reading. This shows a healthy economy with the 2018 average at a higher level than previous years. The rebound higher in the data and the upward revision to last month’s figure, will give relief to those worried about any moves lower. USDCAD moved higher from 1.28516 to 1.28658 after the data release. 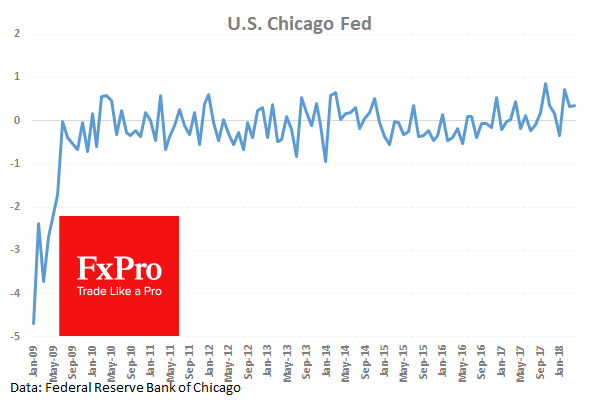 FOMC Member Bostic spoke about the economic outlook and price-level targeting at the Atlanta Economics Club. He said that inflation was likely to run a bit above 2% for a while and that the US is close to or at full employment but wage growth is tepid. The Fed has a target of 2% inflation and it would like to get interest rates higher to counter any run above that level. Higher interest rates would also allow the Fed to counter any economic downturn in the years ahead, so normalising policy is of great importance. Slow wage growth slows the pace of hikes for the Fed. USDCAD moved up from 1.28302 to 1.28480 after this event.

FOMC Member Kashkari spoke yesterday saying that he feels that there might still be some slack in the labour market and wages have not picked up. He said that he wanted to allow the economy to continue to strengthen. He said that he is closely watching the yield curve for signs the economy might falter and he thinks the curve could flatten by year end. The Fed is watching the labour market because full employment could mean that the economy has peaked and that it cannot expand until it finds new workers. If the yield curve flattens the spread between short and long term bonds decreases, meaning short term bonds are less risky and more attractive than long term bonds. USDJPY moved higher from 110.950 to 111.069 after this event.