Friday saw the markets focusing on Crude Oil. Oil experienced a daily decline of 3.2% being the first weekly decline for almost two months. Early Monday trading has seen the downward pressure continue as Brent prices move close to $75 per barrel, the lowest levels since the beginning of May and 7% of the peak levels reached the last week. Similarly WTI lost 9% from recent highs. 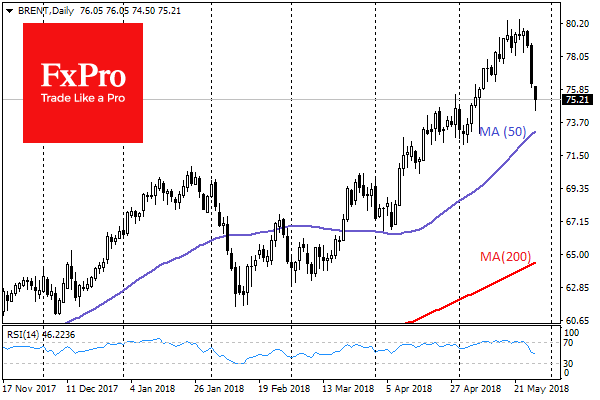 Recent comments from Russian and Saudi Arabian officials on the readiness to ease their restrictions on production as soon as next month appears to be the main factor forcing Oil prices lower. Such a stance appeared after oil reached $80 per barrel and demand outlook appeared to be strong. In addition, Saudi Arabia and Russia appear dissatisfied with the growth of production in the United States and the fact that they are actively trying to expand their market share.

However, there are great risks of repetition of the scenario that occurred in 2014, when the reluctance of OPEC to concede its share resulted in excessive growth in production and provoked the collapse of Crude Oil prices from above $100 pb to near $30 pb in a little more than a year. Previously the decline was initiated by fixing profits, after reaching an important mark of $80 per barrel by Brent, as well as a significant increase in crude oil reserves with stable production in the United States.

Other factors include the signs of a slowdown in the European economy, clear problems with growth in developing-country markets and a stronger dollar.
Crude Oil can trade contrarian to this but these periods are usually short and much more likely to end with a retracement in oil prices rather than a reversal of dollar strength. 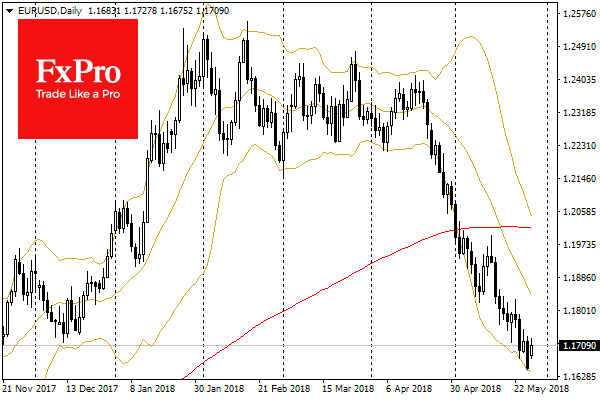 On Friday the dollar index reached its highest since November 2017 mainly because of downward pressure on the euro. The weakening of the common currency was attributed to the nomination of a Eurosceptic for an important economic post in Italy that could lead to further nationalistic undertones. As a result, EURUSD fell below 1.1650 on Friday. Early Monday trading has seen EURUSD trade higher to 1.1720 due, in part, to the Italian President not accepting the nomination. The recent weakness of EUR is likely to remain as the Italian situation could turn into a political crisis in a country where the President does not have sufficient power to make changes. Italian bonds in May displayed the highest growth yields since the end of 2011 – levels not seen since the Greek debt crisis.

Sustained growth in bond yields in Europe may cause the ECB to leave rates low in the region for much longer, which could lead to a serious depreciation in EUR. It is worth remembering that during the Greek debt crisis EUR lost almost 20% in just over a year on the fears of a eurozone collapse, and only the assurances of Draghi “to do whatever it takes” avoided a worse outcome.

On Monday morning Asian news reports that the United States is still preparing for the North Korea Summit.