The political concerns in Italy are spreading across markets causing serious pressure on the banking sector. Global equities have lost about 1.5% in the past 24 hours and risk aversion has continued in early Wednesday trading. Italy’s political problems raise the issue of the possibilities of Italy’s withdrawal from the European Union. Whilst these risks seem ridiculous investors are aware that Trump and Brexit have created political “black swans” which have become more commonplace recently. 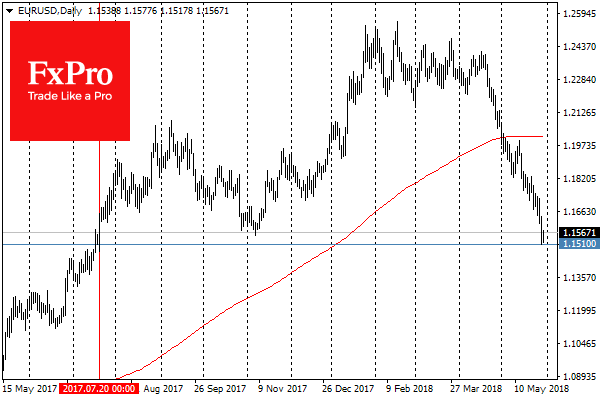 Additionally memories about Greece remain fresh in the minds of the markets. That issue due to the size of the economy of the country (less than 2%) has seen it grow into a eurozone existential crisis. This instability caused EUR to lose approximately 20% in the acute phase of the crisis. More importantly was the loss of confidence in commercial and central banks, causing a fall in the share of EUR in reserves and world trade.

We also saw growing sales for bonds of Britain, Spain and various smaller countries. Conversely many portfolios were replenished with the papers of Germany, the Netherlands, Belgium, Finland – countries with strict fiscal discipline. Japan in this context once again acts as a haven for capitals, against the U.S. where the yield of US Treasuries saw growth yesterday.

Moving capital towards reliability creates a very wide plume in the financial markets because of their deep interconnection. Escape to safe-havens may trigger wider financial deleverage. There is a lot of room to reduce as this indicator recently has reached historical highs. Problems in debt markets can provoke a reversal of debt burden reduction, threatening to turn into a serious sale. Leverage acts as dry powder, it can be stored safely and accumulated for a long time, but the “Italian problem” is a “lit match” in the room. 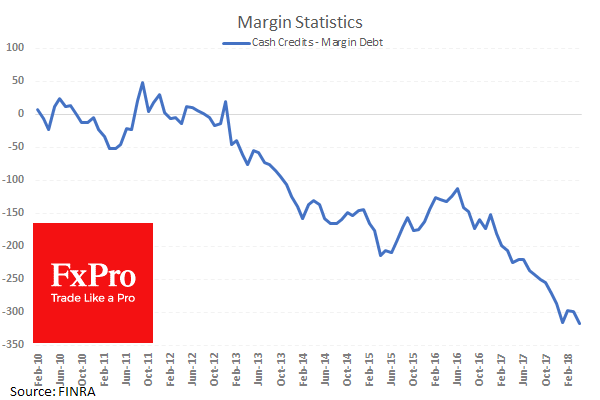 Whether it will be possible to repay is the question of time and prudence of regulators, in particular the ECB.
It is quite hard to believe that the European Central Bank will adjust its pace with regards to QE. Short-term, this can lead to the persistence of pressure on the common currency and threatens the proliferation of security traction in other developed markets.

For developing markets this situation is even more dangerous – there are already enough problems. The deleverage problem concerns not only the demand for shares but also the price of Crude Oil which, historically, is drastically reduced during such periods as it was in 2008, 2012 and 2015.