Italy has a chance
Reports suggesting that Italy has a chance to avoid new elections had a positive impact on world markets. European and American markets retraced the previous day’s declines and Asian exchanges have rebounded from two month lows this morning. Not to be outdone, Crude Oil jump by 3 dollars (4%). EURUSD rose from 10-month lows by 1.2% to 1.1685 in early Thursday trading . 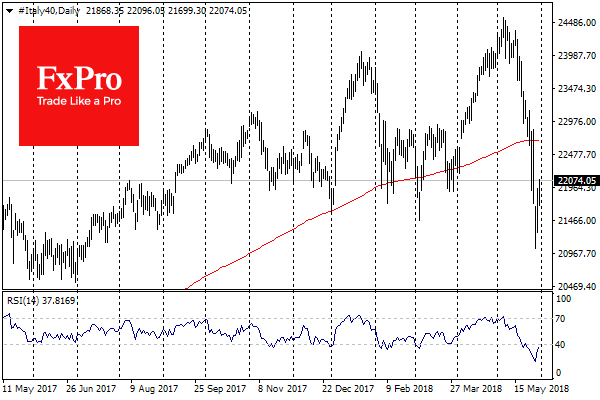 From a technical perspective, Wednesday’s rebound could be the start of a longer recovery after a month and a half period of falling, where the single currency fell against the dollar by more than 7%, returning half of the last year’s growth. 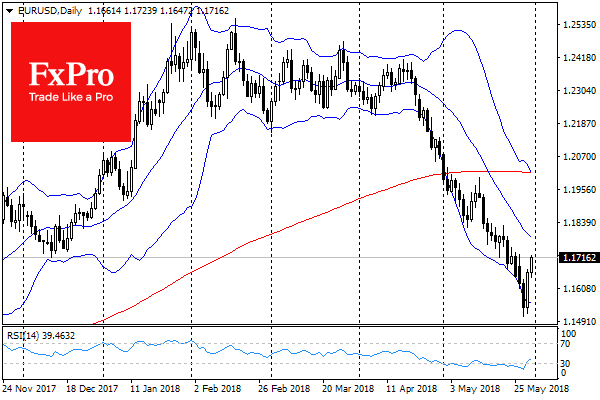 Inflation in Europe
Yesterday’s contrast in statistics from the U.S. and Europe surprised many. German data showed a very strong rise in consumer prices in May. CPI increased to 2.2%YoY, higher than the expected 1.9% after a rise of 1.6% in April. Such a difference between expectations and actual is uncommon to this indicator resulting in a tangible surprise for the euro. On Thursday the markets will closely follow the report on the whole euro area. Strong data will further help EUR continue its recovery. 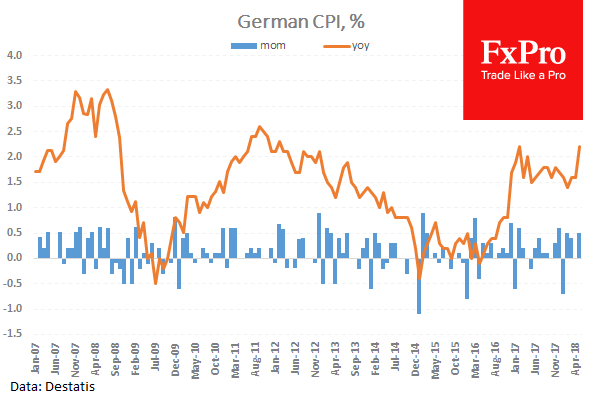 U.S. slowing down?
The data from the US, on the contrary, was disappointing. Employment data from ADP proved to be worse than expected by setting up the prospect of a softer than expected NFP report on Friday. The GDP growth rate for the Q1 was revised down to an annualized 2.2% QoQ.
However, the Fed’s Beige book helped USD to stabilize, noting an increase in the economic growth estimates compared to the previous report. USD therefore still has the opportunity to continue to grow as we close the week if employment data confirms a more upward trend on wages and growth. Many investors will be closely watching today’s weekly Unemployment Claims data which may provide clues to Friday’s NFP report.

Oil impulse
On Wednesday Crude Oil experienced impressive growth after 4 trading sessions of declines. In addition to the growing demand for risks due to some calming of the situation in Italy and the decline of USD, the recent commentary from the Central Bank of Russia (CBR) has helped Oil trade higher. The CBR’s Financial Stability Report stressed the benefits of OPEC agreements to meet the balance of supply and demand.
Such reports typically turn to oil, but the markets are more susceptible to positive news at the moment. It is unlikely that this should be considered the position of the central bank and will somehow affect OPEC negotiations in the coming months. In early Thursday trading Brent has retraced from Wednesday’s spike to $77.90 to trade around $77.20 in early trading. 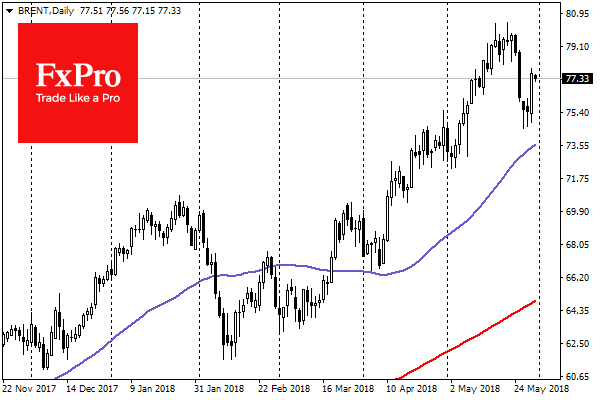