Asian equities were hit overnight on fears of a trade war between the world’s top two economies with US equities set to open lower today. On Friday, the US unveiled a list of $50bn in Chinese goods which will attract 25% tariffs and threatened more duties if China retaliated. Within a few hours China released its own list of retaliatory tariffs on US imports. The tit-for-tat tariffs have brought the two powers a step closer to a full-blown trade war and this will likely be the immediate focus for markets. This week looks relatively light on economic events compared to last week, which saw both the North Korea summit and a Federal Reserve rate hike. However, the Organization of the Petroleum Exporting Countries (OPEC) will meet in Vienna on Friday which will be watched for news of changes to output.

S&P 500
On the daily chart, the S&P500 (SPX) turned lower from the zone of resistance between 2785-2800. On Friday, the index fell significantly during the trading session but did find enough support to turn things around and form a hammer. However a break of 2800 will be needed for a continuation towards 2820 and then new all time highs. Any retracement will find support 2760 and then 2740.

Nasdaq 100
On the daily chart, the Nasdaq 100 (NDX) again broke to new all time highs last week. The index is trading in a potential ascending wedge and if broken could lead to a correction. A break of 7190 could open the way for a move lower to support at 7130 followed by the 23.6% retracement of the lows in April at 7050. However, as long as 7190 holds, another test of the high at 7290 is possible and a break should see the index push towards 7340. 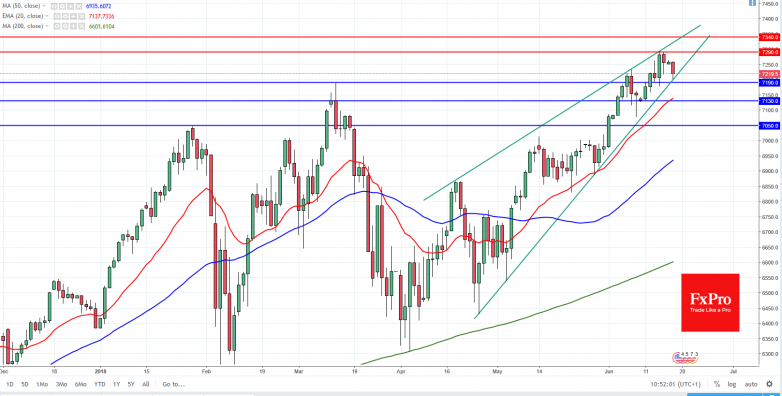