On a holiday shortened trading day the tones coming from the last 24 hours of trading have suggested a risk off attitude as Gold finds support around the 1240.00 area and Equities pare some of Monday’s gains. The Japanese Yen gained a little against the dollar as the US currency weakened a little against the other majors. Risk today comes from low liquidity conditions. Yesterday there was concern from China when a court blocked the sale of memory chip maker Micron, sending stocks lower towards the US close. Oil had a whipsaw day as a bigger draw than expected in private inventories data affected the price. US inventories will be released tomorrow at 15:00 GMT.

UK Construction PMI (Jun) was out with a reading of 53.1 against an expected headline number of 52.0 from a prior number of 52.5. The number beat expectations after the data stabilized around 52.5 for the last two months, up from the low created in April at 47.0. The industry has recovered somewhat but is well off the peak from 2014 of 64.6. EURGBP moved down from 0.88476 to 0.88321 after this data release. 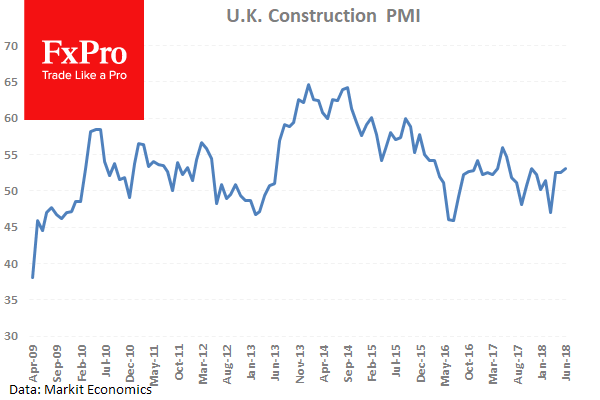 Canadian Markit Manufacturing PMI (Jun) was 57.1 against an expected 55.4 against the previous 56.2. This data set broke above the high from February at 55.9, when it matched the April 2017 number. The expectation was for this reading to fall slightly from the high, as trade tensions start to impact manufacturing planning. However the data beat and moved above the previous high from last month after a strong rise in new work orders. USDCAD fell from 1.31515 to 1.31389 after this data release.

US Factory Orders (MoM) (May) were 0.4% against an expected 0.0% from -0.8% previously which was revised higher to -0.4%. This data was expected to move to zero from negative territory today, but outperformed and achieved a higher reading. The range of this data point over the last three years has been between 3% and -3.5%. USDCAD moved higher from 1.31444 to 1.31746 as a result of this data. 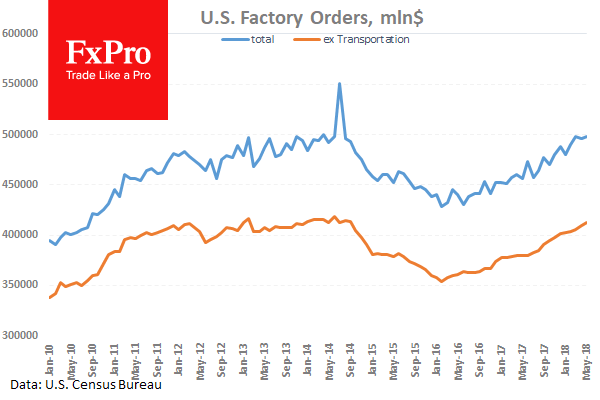