FxPro Forex Analysis: Investors pick up Bitcoin after its fall to $6000

The news brings a cautious hope to the crypto investors that the market will turn to the growth. According to CoinMarketCap data, the total crypto market capitalization has increased by 17% to $275 billion since the beginning of July. For the recent 24 hours, Bitcoin (BTC) grew by 5% exceeding the mark of $6,650 and reaching two-week highs.

The leading altcoins follow the most famous crypto currency; however, they show a more considerable increase from 7% to 16.6%. Among top 50 altcoins, an anonymous currency Bytecoin (BCN) demonstrated the highest growth by 32%.

Bitcoin renews the local maximums and its current growth happens while trade discrepancies increase. A possible favorable decision of American regulators on Bitcoin ETF becomes the latest news driver and should lead to new money inflows from institutional investors.

With the trade volumes increase, the BTCUSD growth seems to inspire optimism in the short run after its decline under the mark of $6000 during the last weeks of June. Tech analysis admirers will pay attention to the mark of $6800, whenever it is reached it means that the “double bottom” pattern is formed which becomes a buying signal. 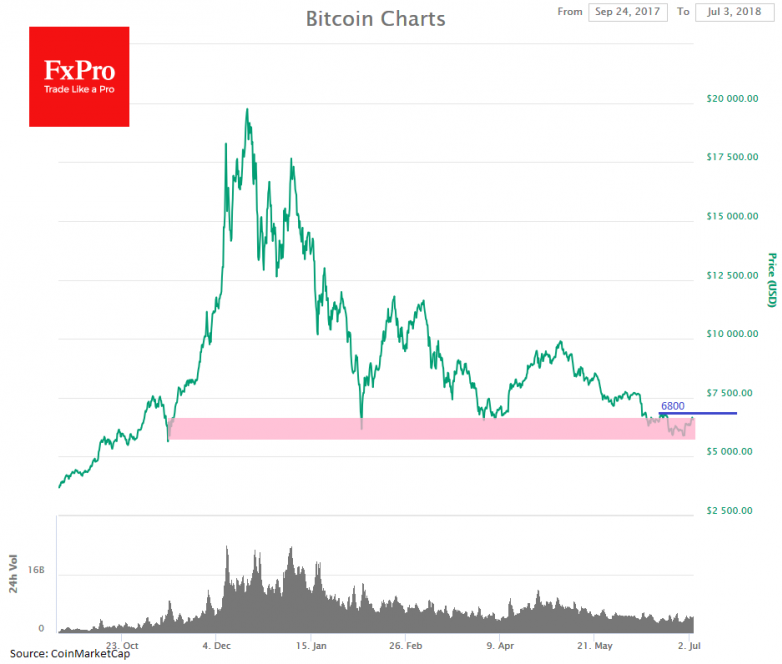 The idea that the $6000 mark became a strong support level for the bitcoin is gaining confidence now. The $6000-6500 price seems attractive for buying as it was last November and later in February and April this year.

Apparently, as price drawdown approaching the cost of mining level, it attracts major players who did not have enough courage to enter the overheated market earlier. While there is not any significant negative news, the major players are now picking the market up around previous important support levels.