The markets remain subdued after yesterday’s 4th of July celebrations in the US. Despite this Oil headlines are dominating the markets once again. US President Trump has restated his call for OPEC to bring down the price of gasoline. He recently backed Saudi Arabia to increase production after he targeted Iran with tougher than anticipated sanctions reducing Iran’s production by up to 1.1M bpd. An Iranian Republican Guard Commander has said that Iran would block the Strait of Hormuz if the US stops Iranian oil sales. Oil has shrugged off the news and is down today after hitting resistance at $73.85 on Tuesday.

In other news some ECB members are said to be troubled about the slow pace of rates hikes, saying that a Sept/Oct 2019 hike is too late. In response the probability of a September rate hike has risen from 69% to 80% along with the EURUSD which is up 0.40% to 1.17000.

German Markit Services PMI (Jun) was out with a number of 54.5 against an expected headline number of 53.9 from 53.9 previously. After reaching a multi-year high in February at 57.3, this data has come back into its range under 56.0 with today’s number beating expectations. German Markit PMI Composite (Jun) was 54.8 against an expected 54.2 from a prior number of 54.2. This shows a stronger reading suggesting a stronger economy. 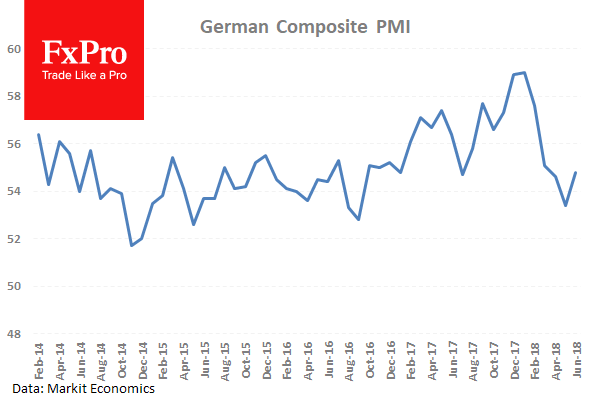 Eurozone Markit Services PMI (Jun) was out with a number of 55.2 against an expected headline number of 55.0 against 55.0 previously. This reading beat expectations but is still down from the high of 58.0 in February. Markit PMI Composite (Jun) was 54.9 which beat the expected reading of 54.8 and the prior number of 54.8. The improvement in the readings is marginal but still leaves a question mark over the strength of the eurozone economy. 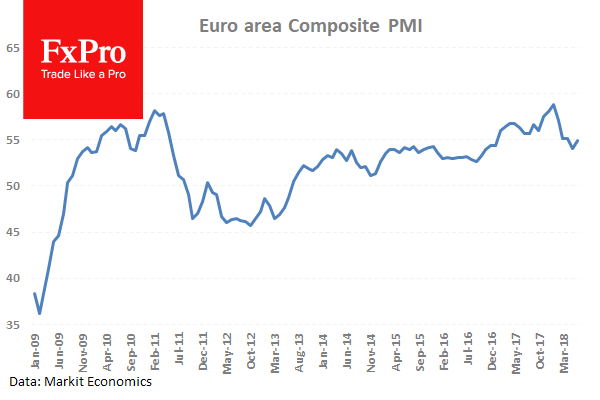 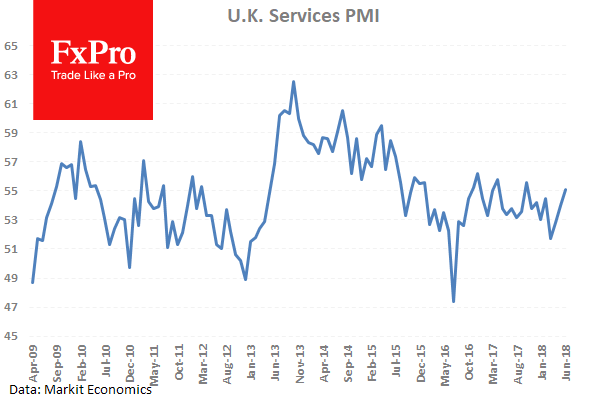