Cable (GBPUSD) took a hit yesterday as Boris Johnson resigned from the Cabinet following the earlier decision by David Davis to part ways with his post as Brexit Secretary. The initial move on the Davis resignation was for Cable to rally from 1.33000 up to 1.33500 but news of Johnson’s departure sent the pair down to 1.31940. Jeremy Hunt replaced Johnson as Foreign Secretary, PM Theresa May was quick to right the ship saying that there would be no second referendum on Brexit but that the Cabinet agreed to step up preparations for a “No Deal” scenario. GBPUSD bounced to 1.32690 as reports came in that a no-confidence vote on May’s leadership would not occur. 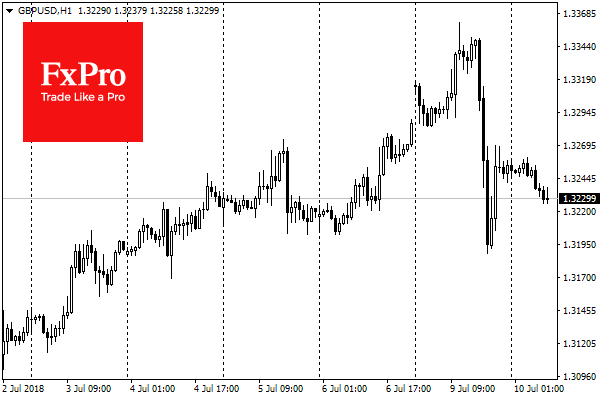 Elsewhere China and the Germany signed a Commercial Accord involving VW, Siemens, BASF and others and committed themselves to multilateral global trade through the World Trade Organisation rules. Chinese Premier Li stressed the need to fight protectionism. The pair also agreed to remain committed to the Iran Nuclear agreement securing Iranian Oil shipments and stabilizing the region. This pushes US President trump further to one side as he is against the Iran Deal and will impose sanctions on companies doing business with the country. Both Germany (and the EU) and China are being hit with US trade tariffs, so for them this comes as a natural response to US trade disruption. President Trump is to visit the UK later this week, with large scale protests expected.

Consumer Credit Change (May) came in at $24.56B against an expected $12.50B from a previous reading of $9.26B which was revised up to $10.27B. This time the data beat expectations after coming in under expectations for five months in a row. The beat was nearly double the forecast and shows a considerable pick up in credit taken out last in May. Increases in this metric are a sign of consumer confidence as consumers take on more debt and lenders feel confident issuing loans. 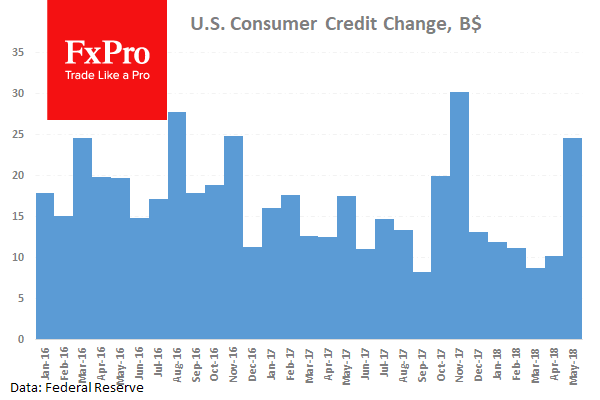