Cryptomarket actively replaces altcoins in portfolios with the Bitcoin. Over the last 24 hours BTC added more than 4% and overcame an important psychological level of $8,000, which sets optimists on the proximity of the new milestone of $10,000. The top 10 coins for capitalizations show either a decrease or a slight increase from 1.5% for Ethereum (ETH) to -52% for the Bitcoin Diamond (BCD), according to CoinMarketCap.

The increase in the demand for the Bitcoin (BTC) coincides with the boost for daily volumes traded by 60% from $3.5 billion on Monday to $5.6 billion today. Investors bet for the market warming up with institutional money, as well as for the creation of investment products that would lead the demand for the Bitcoin (BTC) to a new mainstream level.

Over the past month the Bitcoin grew by 36% which contrasts sharply with 14% growth of the whole market ex BTC. The total cryptomarket capitalization without Bitcoin almost stagnated around $150 billion level for the previous month.

At the moment, the share of BTC in the total cryptomarket cap has reached 47% (the maximum since December 20). In addition, many analysts believe that the Bitcoin (BTC) had bottomed out on June 24 at $5,900 level. 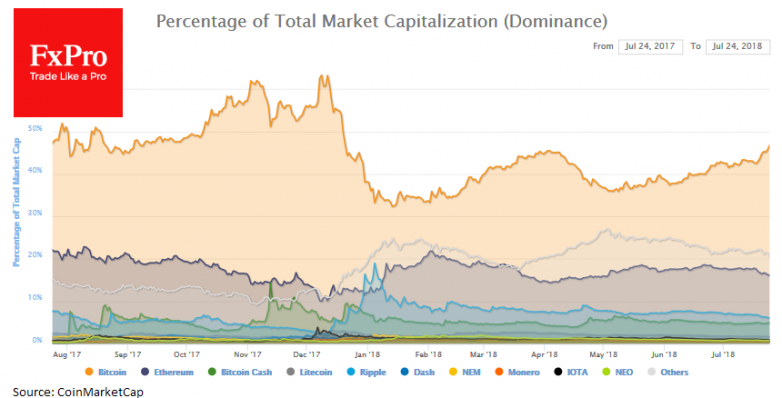 Some technical indicators, including the popular Relative Strength Index, point to an overbought of the BTC, that stands at the level of 73 now. According to analysis rules, the loss of the growth impulse by the price in these conditions and the falling of the indicator to the area below 70 can provoke the beginning of the correction.

Therefore, in the current circumstances it is better to remain cautious in assessing the prospects. The fact that the growth of the Bitcoin has been fueled by the outflow of funds from altcoins since last week raises doubts about the stability of the rally. Without further significant news triggers, the growth of the reference cryptocurrency can awash before reaching $10,000.