Yesterday the markets enjoyed a rare portion of good news on international trade. Trump and Juncker agreed not to introduce new tariffs for the period of negotiations. Europe promised to buy more American goods, including liquefied natural gas. In addition, policymakers from Canada and Mexico expressed optimism about negotiations on NAFTA. This positive news contributed to the demand for risky assets on Wednesday. The dollar lost 0.5% to the euro on this news, the American indices came out in positive territory and grew by 0.9% for the day.

However, the markets quickly returned to the state of alertness. For Germany, the important negative is that the issue of import duties for cars from Europe has not yet been lifted. For investors in Russia, it is important that Europe intends to expand the import of LNG from the U.S. and build the capacity for it. The meeting marked the beginning of a “new phase”, but it is not necessarily that the negotiations will be conducted easily and successfully. The examples of the negotiation failures with NAFTA and China earlier this year set on the expectation that there might be months of protracted negotiations.

Among the important drivers in the stock markets, it is worth paying attention that the Facebook shares at OTC trades collapsed by 24%, reducing the capitalization of the company by more than $150 bln. This falling caused a decrease of Nasdaq by 2.3% and pressed seriously on the shares of other IT companies.

There were two negative events within several hours that contributed to such a strong reaction. China withdrew its permission to establish a joint company with Facebook, which puts into question the possibility of expanding the company in the most populated country in the world. Separately, the quarterly earnings report of the company showed a falling in profit margin to 44%. At the same time, the company warned that the strengthening of security measures in the next couple of years would reduce this figure to “mid-30s”, which is much lower than 47% year before. The company continues to demonstrate the revenue growth and the increase in the number of users, although the growth rate has been at its lowest ever. 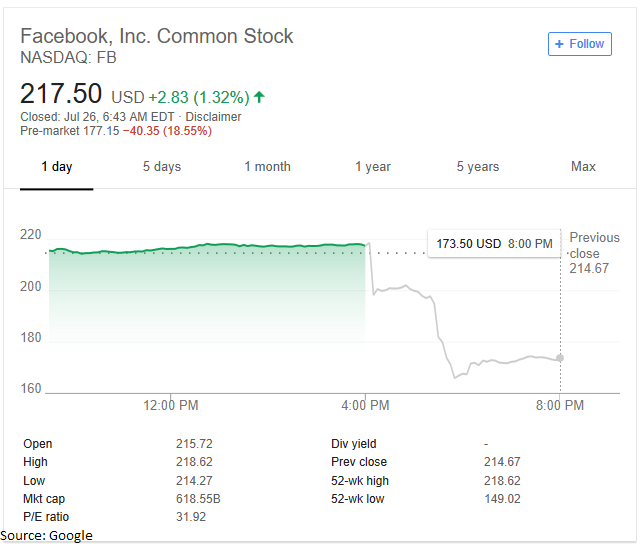 It is worth noting that the market reaction seems excess. In the first quarter, there was an unexpectedly strong increase in profit and users, which has diminished considerable by now. The shares returned to the levels of the beginning of May. With 2.2 billion active users, it is problematic to find the new ones. Moreover, the sales revenue continues to increase with just a slighter slowdown than before.