ECB keeps interest rates, QE parameters, and forward guidance unchanged, reiterating the intention to keep rates at this level at least until summer 2019. During the press conference, ECB President noted the “steady and wide” economic growth of the euro area region and pointed out that the inflation would gain momentum by the end of the year. The acceleration of the inflation and the promise to keep rates unchanged reduces the real (minus inflation) return on investment to European assets. Such softness of the ECB’s position caused a new wave of pressure on the common currency. 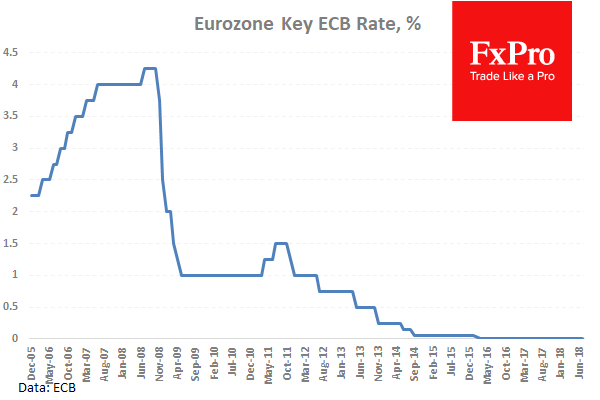 The EURUSD pair lost 0.6% after the press conference had started, falling to 1.1670 – the area of this week lows.

The euro loses its position against the U.S. dollar and the Swiss franc, despite a number of weak statistics from the United States.

The durable goods orders, foreign trade deficits, and weekly unemployment claims were worse than expected but were not able to reverse the negative reaction to the comments of the ECB. 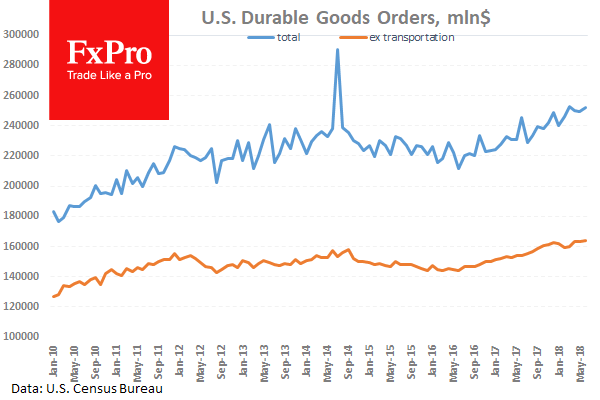 As a result, the euro sank into the area of week lows at 1.1660. Taking this support is able to open the way below as stop orders triggers. In this case, the goals of bears in the pair can become the levels of the previous lows on 1.1630 and 1.1590. If the bears’ attack on the euro loses its impulse, the pair can quickly return to the local highs at the area of 1.1740.