“Buy American” was about the slogan that drove the markets yesterday. Apple shares rose by almost 3%, and the capitalization of the company exceeded one trillion dollars. Investors welcomed the growth of revenue and ignored the slowdown in sales growth, which was severely punished in case of Facebook earlier. Apple’s successes have pushed up the American market and keep maintaining the growth in the Asian stocks since morning.

At the same time, the U.S. currency added due to the demand for safe assets because of fears around trade wars.

The EURUSD pair has traded around 1.1590 at the start of trading on Friday, losing 0.6% per 24 hours. The Bank of England’s increase in rates did not save the Sterling from the sale off. GBPUSD fell close to 1.30 losing almost 1% over the last day.

On the eve of the employment report, the American currency entered the area of three-months highs on the dollar index. In case of a strong market reaction, DXY has the potential to either overcome this important resistance, or once again turn to decline if the published data do not meet expectations.

However, the indicators of the labour market suggest another healthy increase in the number of the employed:
• 4-week average initial jobless claims fell near more than 40-year lows;
• In July, U.S. companies announced the lowest number of layoffs in almost two years, according to the Challenger;
• Employment component in the Manufacturing ISM was one of the few growing components last month;
• ADP report showed the growth of the employed in the private sector by 219 K, which has been the maximum since February. 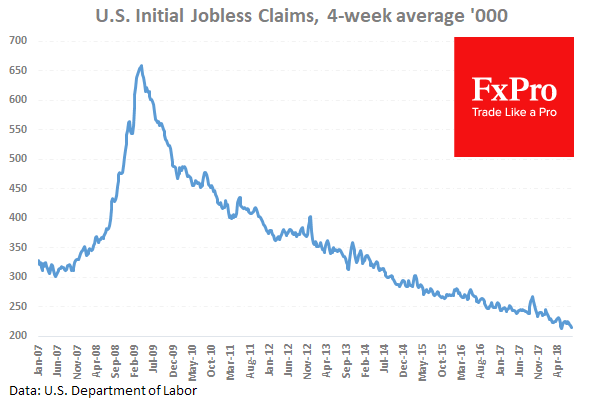 These are many signs that the American labour market maintains a strong impetus for employment growth. At the same time, there is less certainty with regard to the rate of earnings growth. If this indicator surprises the markets with strong growth, the dollar will be able to enter a new phase of growth, even if the number of jobs equals or is slightly less than the average market forecast of 195K on speculations about more hawkish Fed stance.