FxPro Forex Analysis: Bitcoin sell-off continues as mining survival is under the threat

The Bitcoin bears keep control over the crypto market. In the last 24 hours, Bitcoin lost more than 4% and is trading now near the $7,350 mark. On the bear’s side, there are an overbought market and the lack of positive news from the regulators. Altcoins, as usual, follow the benchmark cryptocurrency with more significant drawdowns.

The technical analysis indicates that the current sell-off has all the chances to be continued. RSI index that proved itself on the BTCUSD pair, entered into neutral zone around 50. It means that the sell-off could not face any obstacles until it plunges into the «oversold» areas. The breakdown of the consolidation level at about $ 7,300 could open the way to the sharp decline down to the previous turning point at $6250. 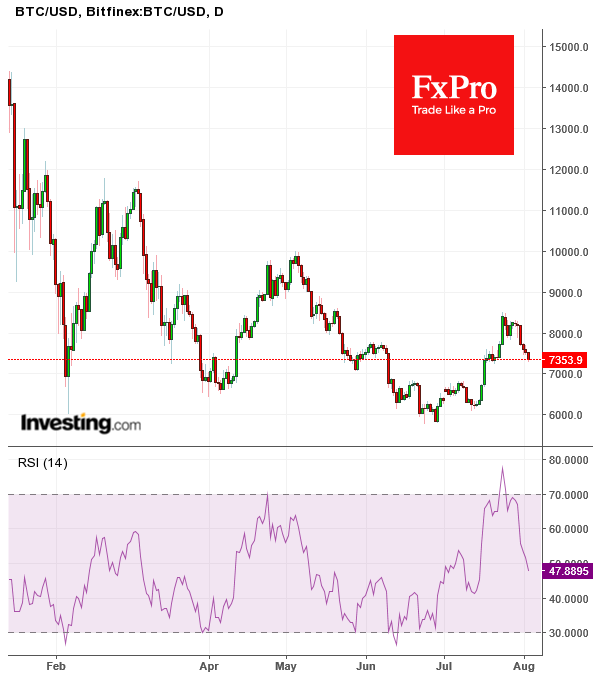 Despite a widely accepted opinion that the main contributors of the crypto market decrease are the bears amongst the institutional investors, currently it is very likely that it is all about the miners. At first, when the BTC prices started to grow and therefore, there was a huge inflow of miners on the market, which turned into a significant increase in the mining complexity growth.

As far as the profitability of the mining has been reduced by 90% since January 2018, they have disposed of the mined bitcoins. It made the significant contribution to the panic sales. Unlike high-profile investors which are using over-the-counter (OTC) BTC trading, miners became a very serious force of pressure on the crypto exchanges.

Currently, there appears more evidence that both industrial and domestic mining on hand-picked farms become irrelevant. The net cost of the Bitcoin is about $6 000, which indicates that miners work almost at a loss: the mining factories are subjected to the increased electricity tariffs while the mining equipment becomes obsolete quickly.

With no asset growth in price, the whole mining industry is in question alongside with the Bitcoin itself.