The dollar adds at the start of a new week, despite the weak employment growth in July report. The EURUSD pair is trading near the 6-weeks lows at 1.1550. Despite a poor number of jobs created, market participants felt that the Fed would maintain its commitment to the gradual tightening of the policy with two more hikes this year.

Nevertheless, the US market continues to attract investors’ interest. The strong company reporting pushes stock indices back to the January highs. A year earlier, the rally of the indices was partially supported by the dollar weakening, but now the USD is experiencing an impressive demand. 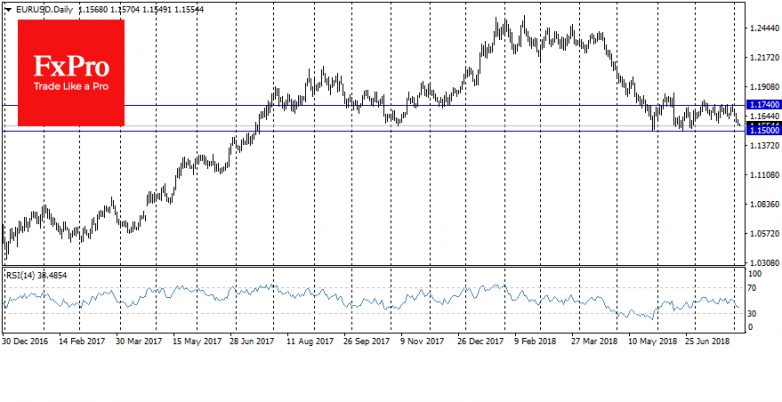 In addition to data on the labour market, the demand for the dollar is also supported by the growing trade conflict between the US and China. China proposes to expand tariffs on US goods, including such sensitive sectors with a trade volume of $ 60 billion as liquefied natural gas and aircraft.

The consequences of the trade conflict between the US and China threaten to affect the growth of the entire region, which puts pressure on the yen as well. The Japanese currency, to some extent, loses its status of a protective currency having lost almost 6.5% to the dollar for the last 4 months as the trade conflicts has been intensifying.

The British Pound fell below 1.30 on Friday and is now near this mark and near its annual lows.

Thus, the US currency demonstrates the strengthening to its largest competitors.

The EURUSD pair is trading at the low of the last three months. It is an important area of support, below which many orders are concentrated. A fall below 1.15 is capable of triggering an avalanche of stop orders and opening the way for a fairly rapid fall of the pair down to around 1.10, without encountering any serious technical support levels along the way.