FxPro Forex Analysis: Bitcoins trouble on the way to take over the world

The cryptocurrency demonstrated its volatility nature again. The SEC resolution to postpone the review of the applications on the Bitcoin-ETF until September caused a sell-off of the digital assets.

The Bitcoin lost 12.5% after the news and the major altcoins fell much stronger. The total cryptomarket capitalization has decreased by $26 bln. since August 7 down to 225 bln. 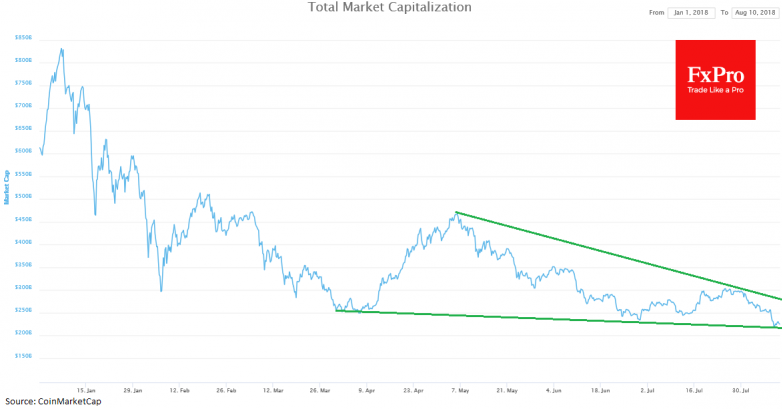 The Bitcoin returned to the levels before the recent rally that was based on the expectations of the SEC solution. Despite the BTC decrease on Friday morning, the RSI indicator no longer gives a signal for sale. After touching the oversold levels in the middle of the week, the price of the Bitcoin could stabilize again in the range of $6000-$6500 for the next few days in the absence of new triggers.

In a broader perspective, it is worth noting the formation of a downward Bitcoin channel (a series of consistently declining local highs and lows). Within this channel, new local lows for BTCUSD could be in the area of $5500, the lowest level since last October-November.

Bitcoin struggles to become a currency
The widespread adoption of cryptocurrency by ordinary investors and users is hampered by its increased volatility. Cryptocurrency will face difficulty to get into the mainstream, when the benchmark cryptocurrency may lose 7% or more during the day on ordinary news. However, until it becomes a payment method, it is impossible to use it broader.

Amazing but true: when Bitcoins were used in the “darknet” for buying illegal products, BTC really served as a means of payment. Now it has become a tool for speculators and an asset for long-term investors, known as “Hodlers”.

ICO has no chances to succeed
The second negative factor for the market is ICOs, which have collected huge amount of money but still cannot show anything “real” at the physical implementation phase.

It is highly likely that ICO projects work properly for the small tech circle, but the public still does not have anything loud and widespread. The future is uncertain, so perhaps we will not get the products at all, and that is why the issued tokens and projects are left in the mainstream shadow with no chances for success.

Bitcoin opportunities tied with weak economies
At the moment the Bitcoin can draw some positive from its popularity in the countries with economical and political uncertainty. These countries make substantial contribution to the real usage of tokens as a payment method.

However, the size of Venezuela’s, Africa’s, and Middle Eastern economies is not enough to create a strong impetus for the cryptocurrency market.

Speculators seized up the Bitcoin
The cryptocurrency market needs new capital markets. As long as the cryptocurrencies are in the hands of speculators, factory miners, whales, and regulators, we will not see any rallies. A zero-sum game between bears and bulls will not last forever. It will end when last enthusiasts will loose their patience coupled with the technical and financial dead end of the BTC net.