The cryptocurrency market has started the current week with an impressive decline. The total market cap fell by 12% to $ 192 billion a day, which is less than 25% of the peak market volume in the beginning of the year. The Bitcoin once again came to the threshold level at $6000 losing more than 6% in the past 24 hours.

The leading altcoins show a two-digits sell-off: Ethereum (ETH) has lost almost 17%, XRP fell by 14.5%, and Cardano (ADA) has plummeted more than any other major cryptocurrency by almost 20%.

As we take a look at the BTC chart for this year, we can see that the cryptocurrency showed lower lows and lower highs until the BTC level reached the current mark somewhat below $6000, which seems a strong support level.

$6000 mark could become the solid support with possible reverse
From technical analysis perspective, the situation looks ambiguous. The Bitcoin returned in the area of its lows where it received support in February, March-April and June. Another rebound from this area could start a significant rally, having established as a bulletproof bottom.

The RSI index also came out of the oversold levels, which often increases the chances for a rebound. Despite the weakness of the market, this scenario looks the most plausible at the moment. 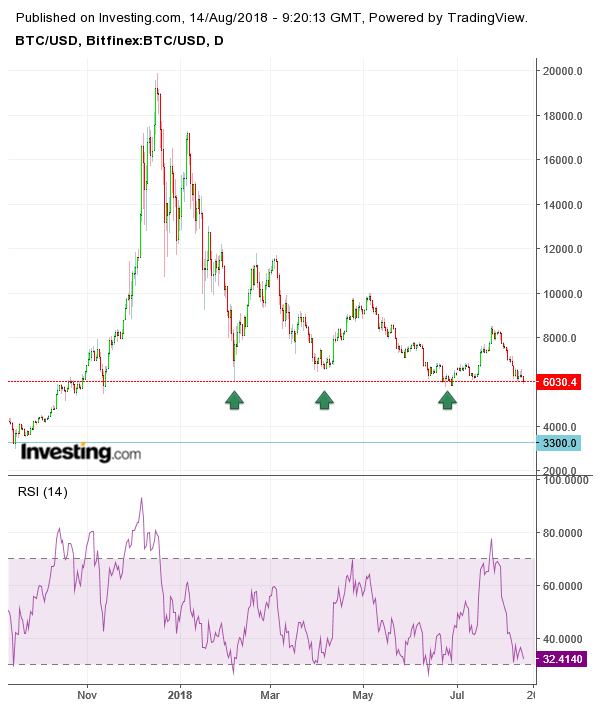 Alternatively, the drawdown lower than the previous levels near $5800 could give an impulse for a new sell-off wave. In this case, BTC would expect a decline to $3300 level due to significant liquidation of long positions.

Volatility in the traditional markets does not cause the demand for cryptocurrencies, as it was a year ago, despite the twofold increase in trade volumes on the Turkish exchanges. In general, the world becomes a witness of a massive diminishing of the interest in cryptocurrencies.