The cryptomarket has started Tuesday in a green zone: Bitcoin has added 4.5% coming closer to $7,050. Altcoins shows the similar dynamics: TOP-10 cryptocurrencies added from 4% (ETH) to 20% (IOTA). The total cryptomarket cap has increased by more than 12% to $228 bln within a week. It could be considered as an evidence that a timid demand appears on the market after a long period of stagnation.

A sharp rate increase showed the DASH coin adding 26% in the latest 24 hours due to the new partnership with Kripto Mobile. According to it, Latin America’s users will get an access to financial transfers via cell phones.

A new partnership was announced in Caracas, the capital of Venezuela, where the economic situation is critical and the official currency bolivar costs almost nothing. Poor economic conditions give lot of opportunities to cryptocurrencies expansion instead of traditional fiat money.

It means that the revolution could be driven not by a few hundreds of the cryptocurrencies whales, but hundreds of millions people from the third world countries who may create an enormous inflow of liquidity to any cryptocurrency allowing it to become one of the TOP-3. Such a “peoples’” cryptocurrency has definitely all the chances to get the throne back from the Bitcoin.

From the analysis side, according to the stock market rules, the bulls market happens when an asset adds 20% of its lowest level. In case of the Bitcoin, which decreased to $5880 mark, the bulls market will start from the levels near $7055 that are almost reached.

Earlier, we’ve already written that going beyond the limits of the corridor 6000-6600 is able to cause an increase in the activity of the market participants and it looks like this gain we saw yesterday. The growth above $7000 can become an additional support factor for the bulls. 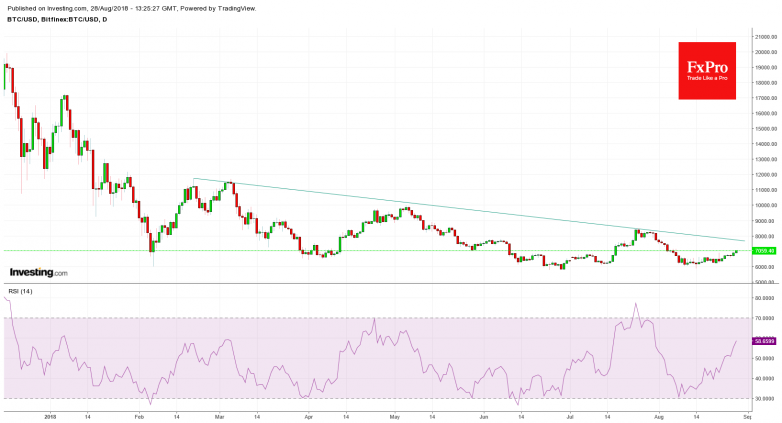