FxPro Analysis: main trends of this summer on crypto market

Currently, the Bitcoin (BTC) has demonstrated almost flat dynamics about 1% in the recent 24 hours after a correction from $7000 to $ 6835. The Bitcoin has been trading in the wide corridor since the beginning of February, and it seems that the BTC price of $7,000 is the limit of optimism now.

We could emphasize this summer trends summarizing a few moments:

First, the lack of ideas that prevented any rally from developing into a long-term market recovery.

Then, the growth of a network complexity is another trend of this summer. Despite the 65% BTC correction from the historic peak, the miners continue to build up the network capacity, which has reached a historic high. A similar picture is typical for the market in general.

Previously, the analysts connected the growth of the network hashrate with the growth of cryptocurrencies rates, but now it looks more like a “fear of losing”, which can results in a deep technical crisis on the market.

Next trend is the growing length of price trends, which has been continuing since the beginning of the year. The inability of the Bitcoin to grow above 7000 seems to be a serious caution. Each time the growth impulses end at lower levels. In January, it was $17000, in February and March the Bitcoin returned to the downturn below $11500. In May there was a reversal almost at $10000. In July, $8300 became an irresistible resistance. If the Bitcoin does not get the impetus to continue the rally in the coming days, the resistance can move in the area of $7000. 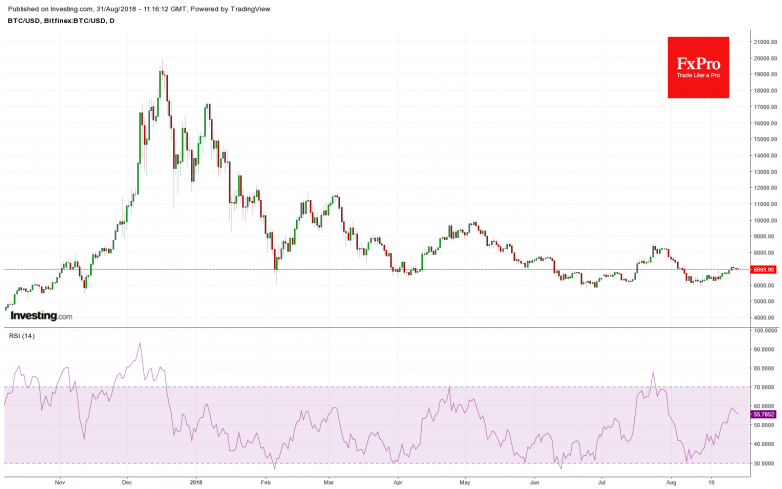 It is important to note that in the whole time the Bitcoin has a stable support in the area just below $6000. The technical analysis teaches us that the movement within such a triangle often ends up with a breakdown of support and a sharp impulse to decline. In this case, the Bitcoin has a serious chance to reach the level of $3000.

Nevertheless, the market participants’ fear “to lose a fortune” is so strong that they are ready to ignore the gravity and hope for a “hot” autumn days.