Since August 31, the Bitcoin (BTC) has added 5% to $7,300, showing its ability to continue the growth after the breaks. The summer lull period is coming to an end and this autumn can bring an increase in trade volumes if significant news triggers appear.

Since the beginning of 2018 the Bitcoin tendency to decrease price peaks has disappointed the market. The Wall Street sharks have prepared the crypto expansion, but nobody has made their position yet.

The large capital is obviously interested in the lowest marks on the market. Retail investors could think that the current marks are a source of opportunities, although for the professional assessment, the Bitcoin’s dropdown more than 70% from the peaks barely could be considered a successful level to enter into the market taking into account the risks and perspectives. For instance, XRP token at the moment is trading less than 10% of its highs at $0.33 comparing to $3,65 at the beginning of the year.

Nevertheless, the largest international corporations were engaged in adapting their business to a new fundamental technology over the past year. Thus, Alibaba and IBM outperformed other companies in the number of patent applications on blockchain, followed by other well-known brands: Mastercard and the Bank of America. Although these cryptocurrencies are considered to be a byproduct of blockchain technology, a successful synergy may lead a well-known or completely new cryptocurrency to the top of success.

The benchmark currency continues to increase for the third week in a row. Current situation promises a serious fight between the bulls and the bears. According to technical analysis, the downward resistance near $7500 could prevent the further recovery.

RSI on the daily charts has not entered the overbought zone, leaving potential for the further rate growth albeit it looks very limited. The trade volumes are still low with the tendency to decrease during the previous month. It indicates that the current growth can be hardly considered as a sustainable. 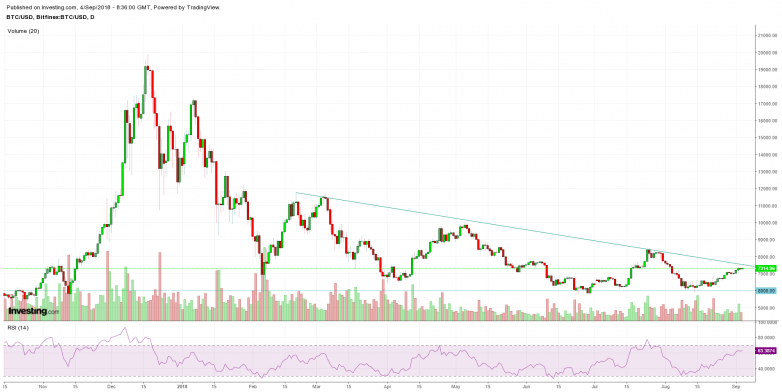