Falling AUD is a sign of serious slowdown for China

The US dollar is on the rise after strong U.S. labour market data published on Friday. The EURUSD is traded near 1.1540; it returned to this month lows. The U.S. stock markets had been declining the fifth day in a row on Friday, and had increased the losses during week to 1.2% on S&P500.

The dollar index is trading near 94.45, adding almost 0.6% after the release of the statistics for August. MSCI for Asia-Pacific region declined by 3.5% last week and remains under pressure on Monday, losing 0.6% due to fears of trade wars.

The acceleration of wage growth coupled with the continued high pace of the U.S. employment growth is a strong argument for the Fed to implement a more rigorous monetary policy. Average hourly wages grew by 0.4%, and the annual growth rate rose to 2.9%, the highest level in 9 years. At the same time, the employment rate increased by 201K, recovering to the trend indicators after the weak data of July. According to CME’s FedWatch tool, the markets are 99% convinced that Fed will raise the rate in September, and lay 75% probability of another increase in December, which is 10 points higher than the month before. 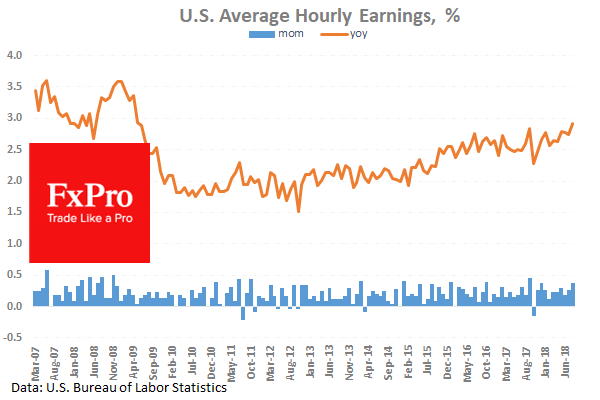 Asian markets had experienced the strongest weekly drop in six months on the outcome of last week amid Trump’s threats to impose tariffs on almost all Chinese imports of more than $550 bln. High uncertainty and already introduced tariffs are already causing a slowdown in the world trade, but China’s surplus in the trade with the United States is updating the records, as US companies are in a hurry to increase purchases from China before the introduction of 25% tariffs. The recent threats of expanding tariffs for almost all exports can lead to even bigger trade deficits in the US and China in the next couple of months, but this will almost inevitably be followed by a serious downturn.

Very often, the Aussie can be considered as a canary in coal mine for the world trade in general and Chinese industry in particular. The fall of the Australian dollar to 31-months lows, despite a strong growth of the country’s GDP, can be seen as an important leading indicator of China’s dynamics, as Australia is a major supplier of raw materials for Asian factories. And now, AUDUSD is traded near 0.71, which is just a couple of steps from 0.68 – the lows to the beginning of 2016, when the fear of a tough landing of China’s economy came over the market.