On Friday morning, the demand for risks on the Asian bourses continues to recover. MSCI for Asia ex Japan is adding more than 1.2% this morning, having evolved the increase from 14-month lows to 2.8%. Hong Kong’s Heng Seng recovered to 1.5 week’s levels. Previously, we pointed out that the technical factors were in favor of this rebound after the indices had entered the oversold zone. The current rebound can last for a while, as the wave of short speculative positions on the indices of developing countries continues winding down.

A similar movement is observed for the EM currencies. The central bank of Turkey became a hero yesterday, raising the rates by 625 bps to 24%. This action has reduced investors’ fears that the CB loses its policy independence hesitating to tighten after the calls of President Erdogan.

It is also important that the dollar has been losing to the basket of developed countries currencies for the fifth day in a row, declining by 0.9% this week to lows of the beginning of August. The weakening of the US currency increases optimism in the markets of developing countries.

Fibonacci theory suggests the potential for a further rebound about 1.5% on MSCI Asia index that will reflect the correction to 61.8% of the reduction from local highs since August 30. The resolute market’s overcoming of this level and further strengthening above 529 on MSCI against current 520 will be the evidence of the optimism predominance in the markets and increased chances of returning to local highs near 543. 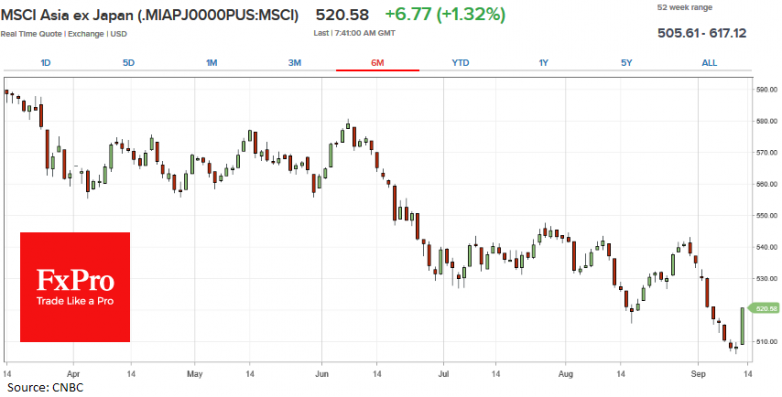 At the same time, the futures on the index S&P500 is only 0.3% lower than the global highs, adding due to the optimism of Asian sites and on the background of weak inflation data. The PPI and CPI indicators unfulfilled expectations and caused a decrease in the chances of two increases in rates by the end of the year from 81% to 75%.