Cryptomarket starts the week in the red zone: Bitcoin (BTC) has lost 3% for the last 24 hours and is trading around $6.300, the second largest cryptocurrency Ethereum (ETH) had fallen by almost 10% and once again has turned back below $200, other top 10 coins now are also in the red zone, losing from 2% to 10%. 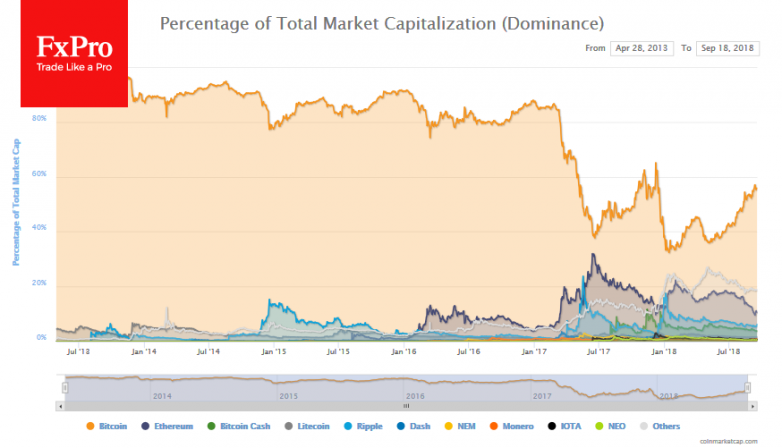 The price dynamics is also accompanied by an increase in the dominance of the Bitcoin (BTC) above 56%, which indicates that investors withdraw their assets from the altcoins towards the benchmark cryptocurrency. At the same time, daily trading volumes are the lowest since November 2017 with increasing complexity of the BTC production due to the introduction of new mining facilities.

It should be noted that the current trade volume is about $10 billion a day and can continue to show a decline without new benchmarks for growth.

Now the exchanges are biased towards the creation of their own or the transition to other stable-coins against the backdrop of a USDT discredit: Crypto exchange Digifinex, one of the top 15, also wants to leave Tether for TrueUSD. It seems that big players want to get their own manipulation levers, as everything that happens around Tether is now carefully monitored.

It should also be said that the current “Ice Age” can be associated not only with the loss of faith in the “crypto-project” in general, but also with the fact that market participants fully control all possible triggers: movement on large purses is tracked real-time, all the tricks with “pumping and churning” are also known and fully analysed, loud statements of authoritative people from the growth to $250000 and fall to $100 for the BTC also have virtually no impact on the price dynamics of the market.

In these conditions, short-term technical factors play an increasingly important role. The recovery of the Bitcoin last week petered, and the benchmark cryptocurrency was quickly discarded to the lower boundary of the range. However, due to the low trade turnover, this weakening looks “false”. It is likely that players pick the most untwisted coins in the downturns.

The fall of the ETH attracted buyers and turned into a growth of trading volumes up to the maximums in 3 months. And still it is necessary to remain cautious with purchases of the Bitcoin as the currency is traded at the important support line and experiences returns to a decline from all lower levels.