World’s Best Currency Rally Is Heading for a Crash 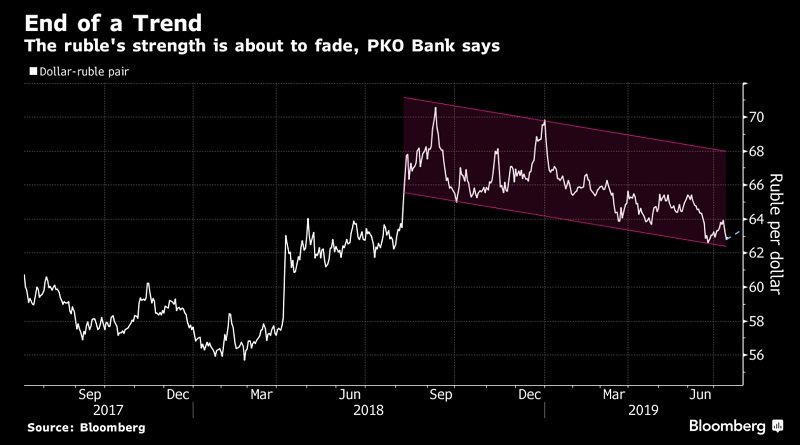 The analyst who most accurately predicted the ruble’s rally in the second quarter is now its most pessimistic forecaster. The Bank of Russia’s switch to monetary easing is the reason Jaroslaw Kosaty, a currency strategist at Poland’s largest bank, sees the currency sinking about 9% against the dollar by the end of the year.

After its 2018 collapse, the ruble staged the world’s best rebound this year and bond yields plummeted as tougher U.S. sanctions failed to materialize and a shift to loser policy globally fueled a rush into riskier markets. The return of foreign investors to Russian bonds lifted the non-resident share to 30% by the end of May from 24.4% as of Jan. 1.

Kosaty predicts the most pain for the ruble out of 19 analysts surveyed by Bloomberg. His forecast of 69 rubles per dollar compares with their median estimate of 65 and implies a 9.1% slide from the currency’s intraday high last week. The currency was 0.6% stronger at 62.63 as of 6:43 p.m. in Moscow on Monday, taking its gain in the year so far to 11.3%.

A second consecutive interest-rate reduction is possible at the central bank’s next meeting and it isn’t ruling out a cut of 50 basis points, Governor Elvira Nabiullina said earlier this month. According to Kosaty, the Bank of Russia will lower rates gradually by 25 basis points in the third and fourth quarters, though a 50 basis-point step is still possible at the July 27 meeting.