Bit-comment: Bitcoin trying to stick above $10000 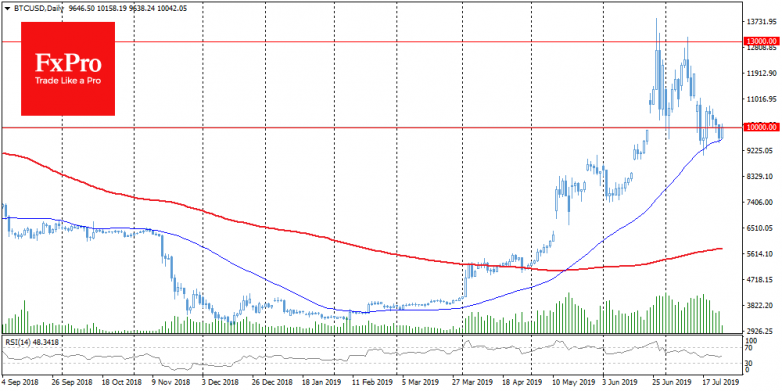 Over the last 24 hours, Bitcoin added about 4%, clinging to levels above $10,000. The bulls managed to form a rebound but not at the first attempt. Most of the day on Wednesday we observed a sideways trend in the range of $9.7K-$9.9K. But closer to Thursday morning the strengthening of purchases sent the first cryptocurrency to the region of $10,100, where it is up to now.

On the technical analysis side, we can say that the support was formed around the 50-day average. It looks like an important signal line for the market. From September of last year to February of the current year, it was a resistance level: as we approached it, sales were increasing. After the price has fixed above this mark in February, it is possible to speak about the beginning of a current phase of growth. The line withstood the strength test on July 17 and 24, probably becoming a positive signal for the whole cryptocurrency market.

Along with Bitcoin, the altcoin market began to grow as well, which may also be related to the expiration of the statute of limitations for bad news around Libra. The number of short positions against BTC remains near the minimum historical levels. Bulls and bears will be pulling the rope for some time, but so far there is every reason to think that there is still buying potential in the market.