On Tuesday morning, Bitcoin jumped sharply by $400, breaking an important round resistance level of $12K, with local highs of $12,200. In case the session closes above this mark, it should convince the market participants that the correction is really finished. In the meantime, the bulls are constantly getting evidence of unrealized consumer demand. The area of around $11,800, which was previously a resistance, can now act as support.

Altcoins are reluctant to join the Bitcoin rally. The main event in the world of alternative cryptocurrencies was the halving of the Litecoin (LTC). The miner award has now been reduced to 12.5 LTC. At the same time, the LTC price showed significant growth of almost 12%. However, the impulse did not last long, and by Monday evening the LTC was selling out. Halving of the 4th largest cryptocurrency in terms of capitalization has not brought the expected dividends so far. By Tuesday morning, even against the backdrop of Bitcoin growth, the LTC still does not even reach $100. 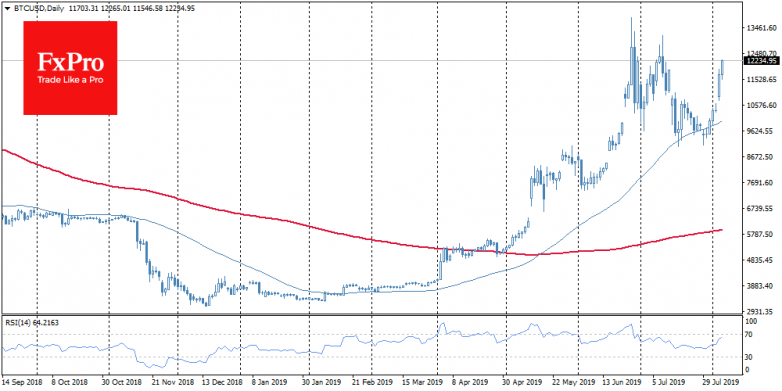 Large investors are concentrated mostly around Bitcoin, ignoring all other cryptocurrencies. This process is natural, as any market undergoes a phase of consolidation. Projects like Ethereum are very rare, and with the arrival of major players, promising developments of small companies are quickly bought out by market leaders. In fact, the institutional infrastructure was created only around Bitcoin.

The geopolitical situation in the world has now deteriorated so much that the escalation of the trade war between the U.S. and China with the subsequent devaluation of the renminbi exchange rate, flight to “safe havens”, Fed rate cut, fears around stock indices may provoke investors to move funds even in such volatile assets as Bitcoin in an attempt to wait out the storm in traditional financial markets. Officials openly admit that they would not be able to get rid of Bitcoin, even if they wanted it very much. The worse the situation in the global economy is, the louder and more irresponsible the statements of populist politicians are, the brighter the prospects for the BTC and, partly, for the altcoins. The current spikes of growth can also be attributed to panic among the Chinese, as the value of the renminbi and stock prices in local markets are declining rapidly due to the trade war. In addition, one should not underestimate the country’s consumer potential and the propensity of the Chinese for gambling games.

If we remember the moment when Bitcoin was created, the logic of the asset’s existence continues to be confirmed: the cryptocurrency is backed by the instability of the traditional financial and political systems. In addition, the negative news background around the fierce reaction of officials around the world against Libra has disappeared. At the moment everyone is waiting for the launch of Bakkt and the appearance of delivery futures on BTC, which in theory may be ideal conditions for the continued growth of Bitcoin.