The financial markets continue their neat recovery, following renewed optimism around the progress of U.S.-China trade negotiations. There is also hope that stimulus from the world’s largest governments will spur economic growth.

The S&P 500 added 1.2% on Monday, Dow grew by 1%. Futures on these indices also added 0.3% in the morning, supported by hopes for new government stimulus. However, this optimism is more like a détente after the previous excessive pessimism and is not based solely on any actual improvement. It may well turn out that the markets are once again jumping the gun – risking a later correction of overestimated expectations of the stimulus. 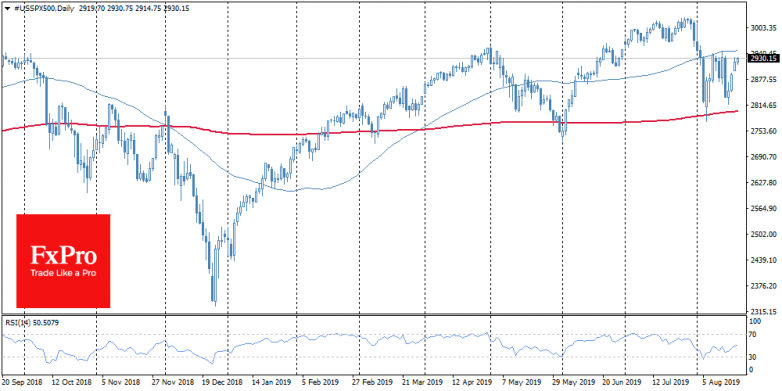 As the FxPro Analyst Team said, the stability of financial markets in the previous two weeks was largely based on the desire of the People’s Bank of China to keep the yuan from weakening. However, the USDCNH offshore rate for the last week rose from 7.01 to 7.07, adding 0.4% on Monday – twice as much as the growth of the dollar index. So far, the markets are ignoring this growth, but the attention may quickly switch to this factor as USDCNH approaches 7.10, i.e. growth for another 0.4%.

In general, the emerging market currencies were under pressure on Monday, with the demand for safety remaining in the forex market under a relatively calm surface of major currency pairs and growth of stocks. 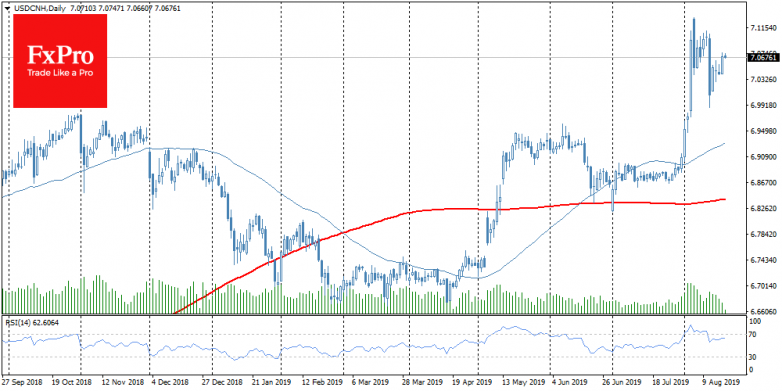 Moreover, the Fed may not be as inclined to soften policies as the markets expect. The Fed’s Rosengren noted the good economic conditions in his speech and warned that an interest rate cut could stimulate excessive borrowing. This is unlikely to be a problem for consumers as their debt burden has continued to decline in recent years. However, the position of one of the Federal Reserve representatives should be taken as a signal that the Fed will try to correct excessive expectations of rate cuts.

Continuing the line of the previous FOMC meeting, the minutes of this Friday’s meeting, as well as the forthcoming speech of Chairman Powell, may further emphasise that the September easing may not be followed by further policy rate cuts if the economy avoids a sharp slowdown.