Once again, the battle for Bitcoin unfolds around the $10K threshold. According to CoinMarketCap, Bitcoin has lost more than 2% during the last 24 hours. Decrease of the price occurs at the background of growth of trade volumes. The effect of the soon-to-be launch of Bakkt waned, and now the tug-of-war game is back, which is typical for the recent time. In case of bear pressure below the lows of mid-August by $9.5K, the participants of the crypto market will hear a very alarming call, as the next significant level of support is only around $6,200, where the 200-day average passes. 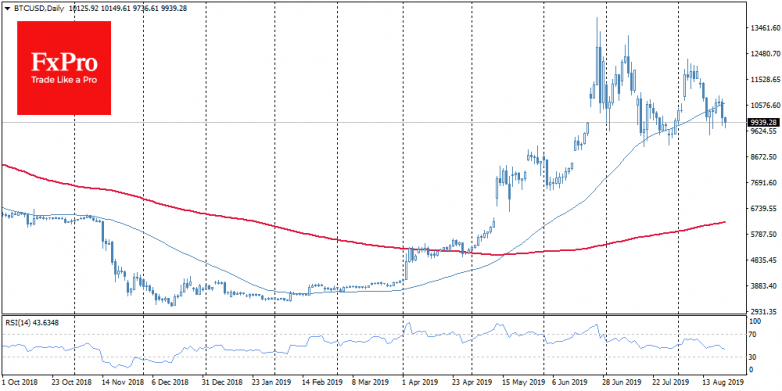 The Bitcoin dominance index is close to 69%. However, the cryptocurrency market is flooded with illiquid cryptocurrency projects. The CoinMarketCap list includes almost 2,500 cryptocurrencies. If all illiquid coins and stablecoins are excluded, the Bitcoin’s market share can go well beyond 90%.

The “fear and greed” index of Bitcoin has fallen to 5, which corresponds to the designation “extreme fear” levels. Judging by the index, it may mean the prospect of a sharp decline, which causes panic on the one side of the crypto market and creates the opportunity to buy at a discount for another. At the moment the market is really selling, but the decline in Bitcoin is not as dramatic as the index shows.

While participants are witnessing the fluctuations of Bitcoin, Tether team considers creating another stablecoin on the basis of the Chinese yuan – so popular became this direction. Against the background of the trade war with the U.S., the actions of the Chinese government, the unrest in Hong Kong, Chinese traders increasingly prefer a stable cryptocurrency for transactions, while at the moment they have the opportunity to exchange USDT to fiat currency at home. It is likely that this scheme is already under the control of the Chinese government.

The Russian project Waves may get an impulse for growth of trade volumes due to the placement of the coin at the Kraken crypto exchange, whereas earlier the largest American crypto exchange Coinbase spoke about similar plans. The last significant price impulse was received by Waves in December 2018 after the mobile application was updated, which allowed buying the cryptocurrency from a bank card.