Bitcoin continues to trade at $10,200 within the range set 6 days ago, losing almost 2% in the last 24 hours. Leading altcoins are losing 2-5%. The Bitcoin dominance index remains around 69%, at multi-month highs. Bitcoin growth continues to be fuelled by the weakening of altcoins.

The technical analysis indicates that the Bitcoin price dynamics formed a triangle, indicating the process of consolidation and accumulation of momentum for a breakthrough, which can be followed by the growth of the benchmark cryptocurrency up to $18.5K. In addition to technical factors, the dynamics of BTC is also influenced by new fundamental impulses. 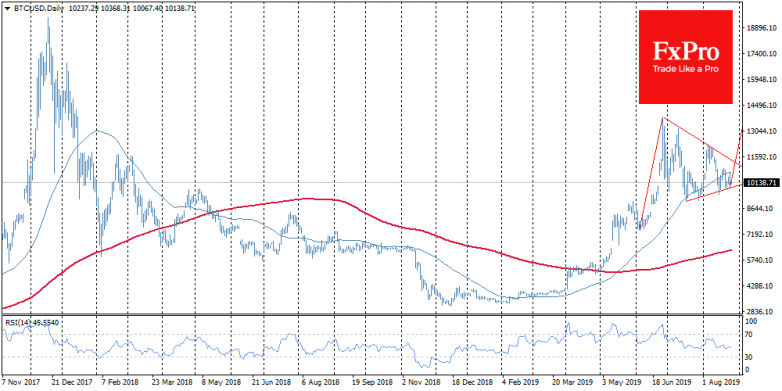 New evidence of the correlation between Bitcoin and geopolitics and macroeconomic uncertainty emerged on Friday. Famous economist and trader Alex Kruger noticed that immediately after Trump’s tweets on Friday, escalated the trade war with China, Bitcoin started to grow sharply. The rally did not last long, but the dynamics indicated that Bitcoin was becoming a hedge in real-time.

Although hardly a BTC can be called a gold replacement or an investment instrument that will help to survive periods of volatility in traditional markets, the asset is still growing and is really attracting increasing interest from investors and traders.

The unexpected statement of the head of the Bank of England Mark Carney during his speech in Jackson Hole can be considered as a confirmation of the growing integration of digital currencies. A senior representative of the central bank of England spoke out radically against both the hegemony of the dollar and the prospect of another reserve currency, including the Chinese yuan. Ultimately, according to Carney, the dollar should be replaced by some form of digital currency, such as the recently introduced Libra from Facebook. It’s hard to underestimate such claims, but Carney will soon be leaving his post, and he clearly understands what he’s doing.

We are in the process of a global restructuring of the monetary system. Everything is evolving, and the monetary system is no exception. The ways in which countries, banks and the public will interact with each other will change radically, and so far, everything indicates that full control over cash flows is approaching, which has always been the cherished goal of governments. The more ironic it is that this can be achieved through a technology that has been designed to get freedom from intermediaries at all levels.