Bitcoin is again in the spotlight after an overnight spike of more than $600, to $10,400, which offset the drop of the end of last week. The bull’s mood is improved, following a 55% rise in the trading volume. Nevertheless, the price spike will not lead to excessive optimism among market participants, because in the long run Bitcoin remains locked in a sideways trend.

TOP-10 altcoins are growing by 4-7%. However, the fact that Bitcoin is climbing stronger than its main rivals is eye-catching once more. This is noticeable in the further growth of the dominance index, which exceeded 70%. 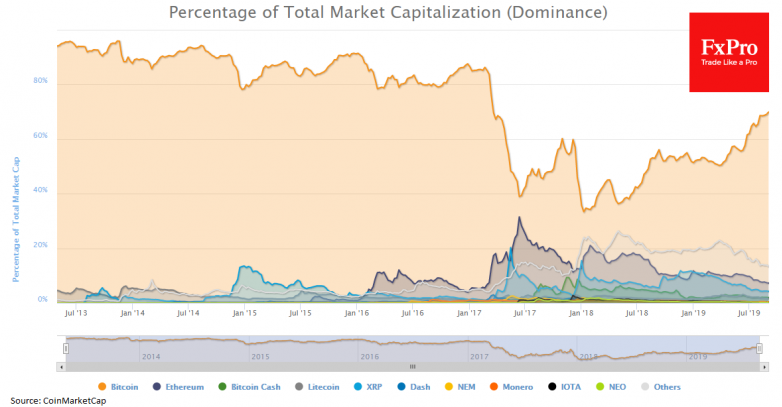 Market participants would like to classify BTC as a protective asset but fluctuations of tens of per cent per day do not correlate well with the definition of a safe haven. So far, it seems that crypto-enthusiasts or, to be more precise – speculators – are strengthening their purchases on the news about the destabilisation of the traditional financial system. However, they are closing positions rather quickly, without getting further development.

If you look away from the media reports and focus only on the charts, you will see that Bitcoin received support at the end of last week on the decline to the region of $9,300. Indeed, this is same the level where the purchases intensified in July and August. At the same time, it is worth paying attention to a series of declining highs in the BTCUSD rate since the end of June. 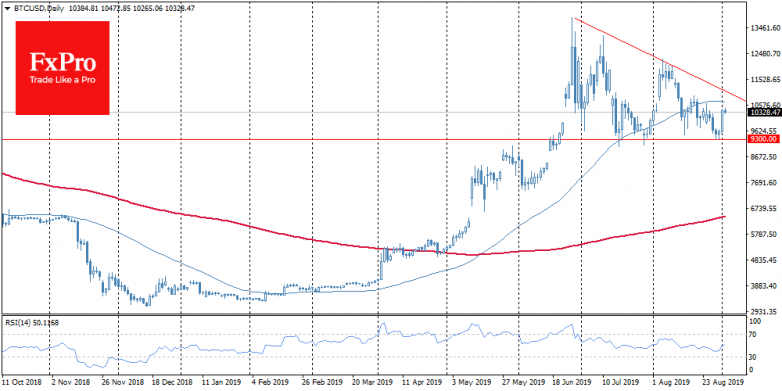 It should be noted that August turned out to be a very difficult month for investors and traders. According to the data of Bloomberg World Exchange Market Capitalization, the world stock market lost $3 trillion due to geopolitics and general uncertainty. The total capitalization of cryptocurrencies fell as much as $27 billion and compared to the traditional market, it is, of course, a very modest figure. These statistics show that we are at the early stages of the crypto market development, and how easy Wall Street sharks can manipulate the crypto market in the near future. They will be able to freely raise the price of coins at a cosmic rate, as well as collapse them as quickly as necessary.

Increasingly frequent discussions among prominent politicians and officials, including the recent unexpected announcement by Mark Carney about the end of the dollar’s hegemony, suggest that the crypto market is approaching the stage of pumping in real cash from retail investors. Currently, it is expected that Bitcoin will become the main beneficiary, but Wall Street sharks can always offer an unexpected scenario to the market.