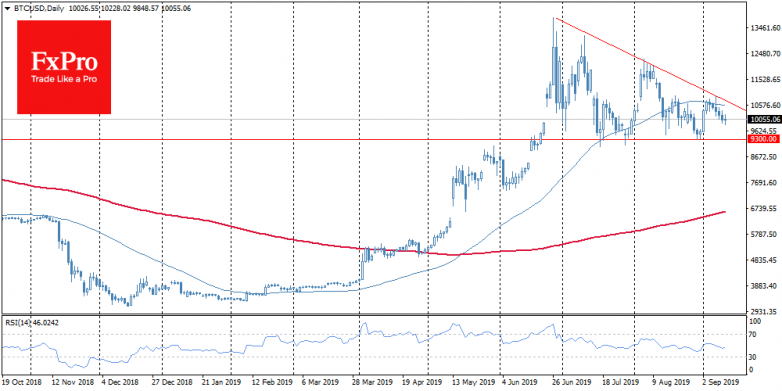 Bitcoin has been slowly approaching an important threshold around which bears and bulls have been fighting for about 3 months. Bitcoin has lost almost 2.5% during the last 24 hours, and at the moment it trades around $10K. The dominance index has dropped to 69.6%. A breakthrough of the psychologically important level can increase the pressure of sellers. However, there will be many more serious support levels on the way of decline, for example, the level of 9,300, at the approach of which purchases have been increasing since the middle of July.

Bitcoin is waiting for the most important fundamental event ahead – the launch of futures from Bakkt. The company has already started to accept deposits, and after the official launch on September 23 we will see in which direction the institutional wind blows. Everybody understands that there may be a decline, but in general, the market is bullish. The launch of the CME futures in mid-December coincided with the highest hype around Bitcoin, prices were overheated and investors made the only possible bet at that time: the decline. Now, although the market has shown impressive growth since April, Bitcoin still costs half as much as in December 2017.

Consistency and moderation of growth and corrections would serve the best service of BTC because if the market gives the asset to go through the consolidation process at the levels occupied, it will save the cryptocurrency from a collapse.