Crypto market had a welcome surprise: over the last 24h, the total capitalisation of digital currencies grew by more than $8.3 billion. Primary growth was held in Bitcoin (BTC) and Ethereum (ETH), climbing about 5% and 6% respectively. This increase may be due to the launch of the p2p platform from Binance, where Bitcoin and Ether trades in Chinese yuan. The prospect of appearing payment methods through Alipay and WeChat also indicates an increase in the flow of money from China. Everybody has been waiting for the inflow of institutional money, but the Chinese retail mass of investors may have a more significant impact on the market. 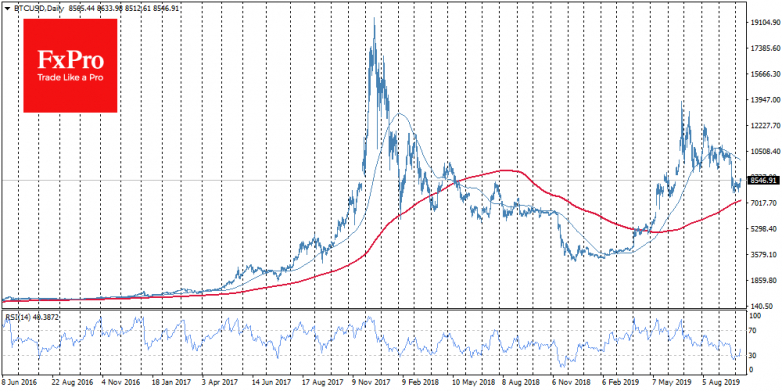 Bitcoin’s growth momentum has led RSI out of the oversold area. This index rose above 30 on the daily charts. Last time the recovery of the index from oversold territory occurred in January of this year and preceded the stop of BTCUSD sale. A significant rally on this instrument began only two months later. However, it was a recovery after a very destructive decline. In previous episodes, the restoration of purchases in Bitcoin was much faster. So the daily fix of RSI above 30 should be considered as a very positive technical signal.

The growth is taking place at the moment when it became known that the SEC rejected the Bitwise request to launch Bitcoin-ETF. The market participants are so tired by the failed history of ETFs that recent news does not cause any dynamics at all. By default, most people understand that the regulator thinks the market is too volatile and won’t give it the “green light”.

Analysts at The TIE recently concluded that cryptocurrency headlines mentioned by the press had dropped significantly. We are talking about a drop of up to 90%, and it concerns all possible sources from the leading mainstream publications to Twitter accounts. The theory that the circle of digital currencies will narrow down to the few largest blockchains, around which the main dynamics will unfold, is gaining momentum. 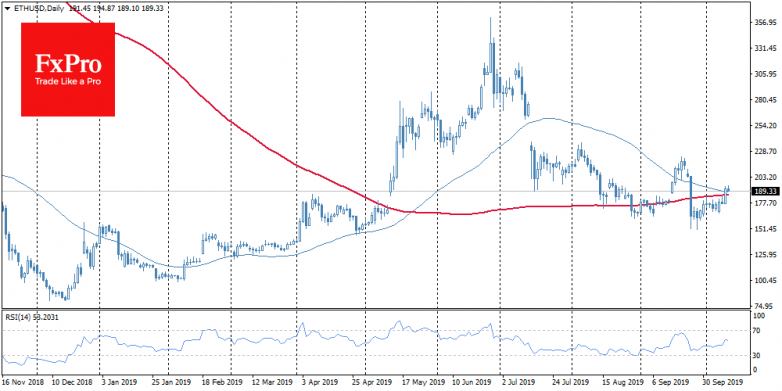 Now already, we can see signs of the emergence of a new limited number of participants in the crypto market structure. The main focus is on Bitcoin, Ether and stablecoin USDT.

Bitcoin is the first and benchmark cryptocurrency. Ethereum is the leading altcoin. USDT uses as a “safe-heaven” in turbulent times, and this cryptocurrency serves as an XRP in the context of money transfers. The digital currencies will likely follow the path of the classical IT-market model. It is often in IT that 2-3 major players receives 80% of the market, while the other players try to share the rest 20%.

Large companies are also on the way to producing their digital currencies. While Zuckerberg’s Libra got a cold receipt, Telegram stays untouched yet. According to Combot, Telegram registers 300K new users per day. The Telegram team has already promised to give access to the first tokens and published the terms of use of the wallet. The project team has kept its promises and is running on time, which can be considered a great start. There is no doubt that the regulators will start to look closely at Telegram as well, since the user base of the project, though less than Facebook, but demonstrates substantial growth rates.