The regulators strangled Libra and get down to the GRAM

With zero price dynamics over recent days, Bitcoin causes unpleasant deja vu among market participants. A steady decline below $8K may become an obscene event for the market, as it potentially opens the way to new local lows and near the lower boundary $7K. Earlier investors bought back Bitcoin right after such downturns, considering their possibility to enter the market “at a discount”, then as the rate decreases, the opinion about the asset changes. At some point, the market starts to believe in the trend change and the end of the bullish phase, and then Bitcoin becomes too expensive to buy. 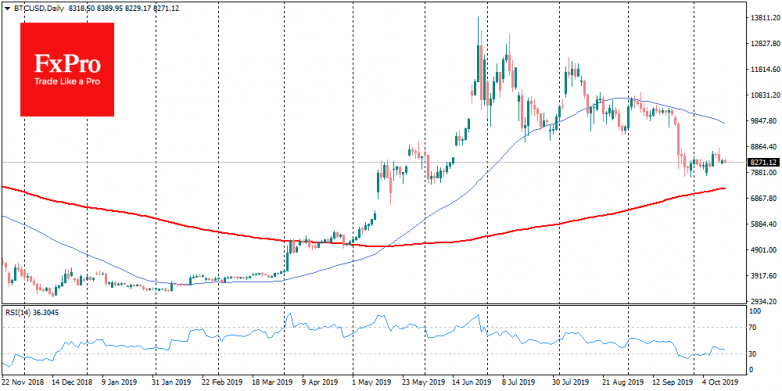 Altcoins also obviously do not see any road maps. No one else promises a breakthrough and a “Brave new world”, references to “1984” are more common, judging by how strong the governments’ desire to get rid of even hypothetical competitors in the form of Libra and GRAM. Bitcoin and some other cryptocurrencies appear to be considered as “unavoidable evil” by the authorities, but they see no threat in these projects. They don’t see it yet. It’s about the trade volumes: if we are talking about several fake billions of dollars, no one will waste the time of regulators.

We can say the same about Facebook. Libra Association has lost another major participant – Booking. As escape velocity begins, more and more notable brands may also announce their disbelief in the project. It is not yet clear how much the company’s desire to promote its digital currency is. There are a vast number of smaller companies that want to take the risk of entering the project, but Facebook itself has something to lose. If the company management decides to wind down the work, it may have a rather versatile impact on the market.

On the one hand, abandoning Libra will draw a line under all such projects. If the most prominent player is “strangled”, others won’t try. On the other hand, there is no absorption of the crypto market by large corporations, which is also very feared by crypto-enthusiasts. So Bitcoin and some other cryptocurrencies, invented on a wave of frustration in the banking system, may get a reason for live in opposition to the traditional financial market. Satoshi’s idea proved to be true: only decentralization and absence of leadership can keep the project alive.

Telegram’s Blockchain can face a Libra-like fate. As Telegram company started distributing the long-awaited tokens, the SEC announced that token-sale was not registered, and the tokens were declared as securities. The regulator managed to obtain a temporary court ban on the distribution of tokens among American investors, who invested almost half a billion dollars in the project. GRAM will be “strangled” as actively as Libra. The regulators’ lightning-fast reaction, consistency of the work of the courts and officials, testifies to the strong political will. It turns out that the Bitcoin-maximalists were right. Ethereum may replace the FB and Telegram if its volumes are “too high” for politicians to keep a distance.

At the moment there is a very unpleasant combination of events on the crypto market. It turned out that the excitement around the p2p of the Binance platform turned out to be fake. A screenshot appeared on the network indicated the prospect of integration of Alipay and Wechat, which could potentially increase turnover. However, representatives of Alipay and WeChat reacted strongly to the fake buttons in the application, saying that they would never go for such integration.

The official Chinese position remains very tough and in line with the US position.