The crypto market started to decline moderately. On Wednesday morning Bitcoin loses almost 2% and changes hands for $8,000. The price decreases with a relatively stable trading volume of around $15bn. Other leading cryptocurrencies also show a decline of 1-5%. 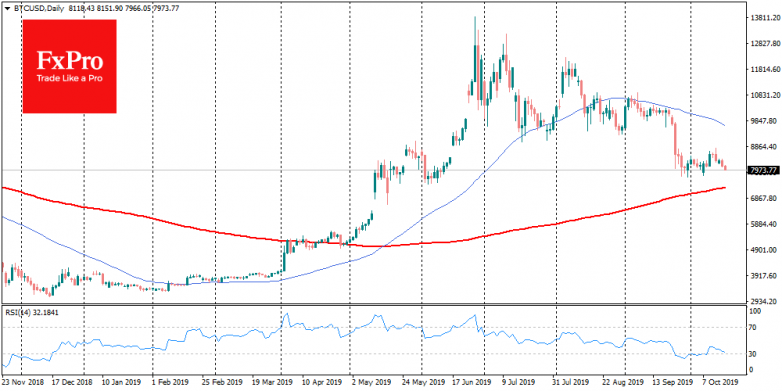 In moments of loss of faith in the market, large transactions often occur, which are designed to demonstrate the advantages of digital currencies. Thus, on October 14, a $920 million purchase with a commission of $4 was made in the Bitcoin network. The wallet immediately found itself on the 4th place in the list of the largest ones. Such demonstrative movements of funds happen less and less often, and what the market lacks is a massive retail volume.

Bitcoin would benefit from an alternative “side-project” that could function as a stablecoin in conjunction with a “big blockchain”. Bitcoin has recognition and infrastructure, but price volatility kills it as a means of payment. Nobody wants to lose the potential of investment storing the Bitcoin, but another fact is undeniable: most of us need a quick, cheap, commonly used and relatively anonymous way to transfer money.