Bitcoin returned to $9K and this is starting to disturb

Bitcoin is corrected to the round level of $9K, losing more than 2% over the last 24h. After such impressive jump in price, it does not cause anxiety among the participants of the crypto market. However, the inability to overcome $10K may hit the BTC and altcoins. Positive impulses on the digital currency market look rather fleeting lately. 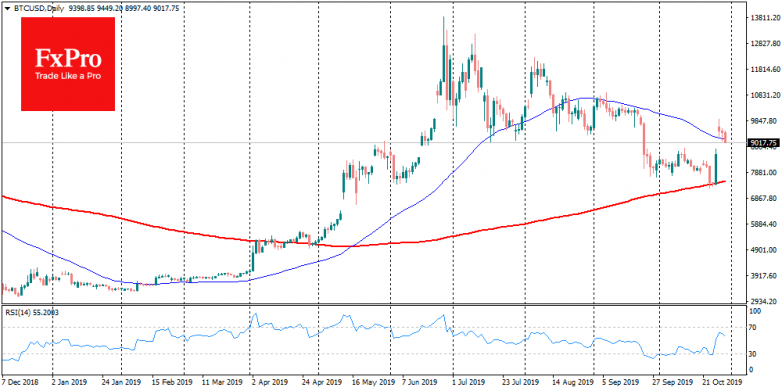 Encouragement around China’s transition to the blockchain may be replaced by disappointment, as the state-run media People’s Daily hastened to explain the situation with the statement of China’s leader. Switching to blockchain does not mean that Bitcoin is approved. China will maintain a tough stance on digital currencies, while it was one of the first countries to ban ICO and Bitcoin trading a few years ago.

The greed and fear index is at a neutral value of “53”, the BTC dominance index sank to 67.3%. The technical picture has become a little more gloomy. BTCUSD came close to the 50-day average. The ability to stay above $9000 will allow us to speak about the preservation of bullish moods, while a breakthrough of this level can open a direct way to the decline to $7500.